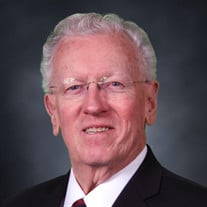 Russell F. McNamara, 87, of Traverse City, passed away May 30, 2021 at Cherry Hill Haven.  He was born April 10, 1934, in Detroit, the son of William and Lela (Fletcher) McNamara.  He graduated from Waterford High School in 1952 and married Carol Morris in 1954.  After serving four years in the Navy, the family returned to Michigan, where he completed his Bachelor's and Master's degrees in Finance at the University of Michigan.  In 1960, Russ started his career at Traverse City State Bank, ultimately becoming Senior Vice-President and Trust Officer.  Wanting to be in business for himself, he bought Murray's Boats and Motors in 1978 along with his business partner Jerry Meyer. Russ later bought out Jerry and then operated the business until 2005.  After retiring, he worked for Reynolds Jonkhoff Funeral Home--he never was one to sit still. While enjoying skiing and travel, Russ's true passion was aviation.  He was involved in pilot training in the Navy, and started private pilot lessons in Traverse City.  Eventually he owned his own small plane and he loved taking the family on vacation or just up for a flight.  For 15 years, he flew for Wings of Mercy, taking patients all over the Midwest for specialized treatments.  He also flew for the Coast Guard Auxiliary.   Russ was involved in too many community organizations to list, but the Lions, Elks, United Way, Cherry Festival, Girl Scouts, children's sports, his church and the ski patrol all benefitted from his volunteer time.  In 2018, the Elks awarded him their Lifetime Leadership Award. After Russ and Ann were married, he became a member of St. Francis Catholic Church where he served as an usher, sang in the choir, was a member of the Knights of Columbus, helping with their pancake breakfasts and other projects. The Knights of Columbus honored the McNamara family as their family of the month for their participation in the parish and the community. Russ and Ann also volunteered their time at The Music House. Russ was preceded in death by his wife Carol in 2013, and he then married Ann Harrison in 2015. Also preceding him in death were his parents and his brother Paul.  He is survived by his wife Ann and his five children: Lynn (Andrew) Goldblatt of Hillsboro OR, Sandra (Joshua) Wysong of Park City UT, Lorraine (Shaun) Paton of Kingsley, Jeffrey (Marnie) McNamara of Interlochen and Paula (Sean) Hurt of Normandy Park WA.  Also surviving are his grandchildren Edward, Carol, Logan, Victoria, Travis, Evan, Audrey, Tyler and Caitlyn, and great-grandchildren Bridget, Maya, Jacob, Naomi, Asher, Asa, Ileigh, Petralina and Colton.  Also surviving are a niece and nephews in the Detroit area. Russ was the best example ever of a man of intelligence, integrity, responsibility and honor.  His family loved him very much and will miss him forever. Visitation will take place at the Reynolds-Jonkhoff Funeral Home Garden Tent on Tuesday, June 8, 2021 beginning at 10 AM with a funeral service immediately following at 11 AM. Father Ken Stachnik will officiate. In addition to this service, a memorial mass will be celebrated at a later date at St. Francis Catholic Church, with the date and time to be announced later. Burial will be in Grand Traverse Memorial Gardens in an intimate family service. Those who wish not to attend in person, may participate by logging in to the livestream presentation. Go to www.rjfh.tv and then click on Russ’ photo to enter. The family would like to thank the staff at Cherry Hill Haven, Heartland Hospice and Chronic Care for Dad's excellent care.  Memorial contributions may be made to Wings of Mercy, 100 South Pine St., Suite 393, Zeeland, MI 49464 or to the Alzheimer’s Foundation, 25200 Telegraph Rd., Suite 100, Southfield, MI 48033.

Russell F. McNamara, 87, of Traverse City, passed away May 30, 2021 at Cherry Hill Haven.  He was born April 10, 1934, in Detroit, the son of William and Lela (Fletcher) McNamara.  He graduated from Waterford High School in 1952 and married... View Obituary & Service Information

The family of Russell F. McNamara created this Life Tributes page to make it easy to share your memories.