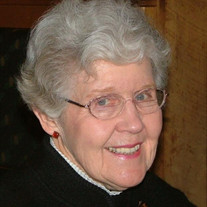 Traverse City - Ruth C. Braun, 90, of Traverse City passed away peacefully on January 4, 2016, at the Grand Traverse Pavilions Evergreen Cottage. Ruth was born on November 15, 1925, in Grand Rapids to the late Robert Emmet and Esther (Hamel) Lewis. On October 25, 1951, she married the late Richard H. Braun at St. Andrew’s Cathedral in Grand Rapids. She attended the Chicago Institute of Art and was an accomplished painter, with many of her works featured in area galleries. She was a member of the Northwestern Michigan Artist and Craftsman Association and one of the original members of the Plein Air Painters of Northwest Michigan. Ruth was a longtime member of St. Francis Church where she served as a lector, on the funeral luncheon team and as the church bookkeeper from 1977-1985. Her Catholic faith guided her life, and she found great comfort in attending daily Mass for as long as she was able. She had a passion for art, music, literature and lifelong learning. Ruth never ceased to be amazed by God’s creation, and she appreciated the beauty of everyday life - in nature, human relationships and intellectual pursuits. Her children and grandchildren were the joy of her life. Ruth was preceded in death by her husband, her parents and her brother, Ralph Lewis. She is survived by her children Amy Braun and Denise (Thomas Sletteland) Braun of Traverse City; Betsy Braun of Naples, FL; Nannette (Jay) Meyers of Mayfield; Kurt R. Braun and Mary (Joseph) Winowiecki of Traverse City; grandchildren Jamey, Shaina, Zachary, Becky (Nick), Jordan, Owen, Michael (Christina), Christopher, Brian (Kayla), Emma and Mitchell, and seven great grandchildren. A Mass of the Resurrection will be held Saturday January 9, 2016, at 11:30 a.m. at St. Francis Catholic Church with visitation beginning at 10:30 a.m. A luncheon will be held at St. Patrick Catholic Church immediately following. Graveside services will take place at a later date at Oakwood Catholic Cemetery. In lieu of flowers, memorial contributions may be directed to the Father Fred Foundation. Please visit www.reynolds-jonkhoff.com to share your condolences and memories with the family. The family is being served by Reynolds Jonkhoff Funeral Home and Cremation Services.

The family of Ruth Catherine Braun created this Life Tributes page to make it easy to share your memories.