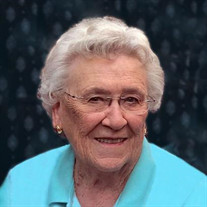 Ruth Selma (Schury) Meyka, 90, of Traverse City, passed away unexpectedly Sunday, August 25, 2019 at Munson Medical Center in Traverse City, Michigan. She entered into the presence of her Lord surrounded by her beloved family. Born on March 12, 1929 in Flint, Michigan, she was one of two children born to Selma Marie (Schiefer) and Benjamin John Schury. She was baptized at Our Savior Lutheran Church in Flint and was also confirmed at Our Savior Lutheran Church on March 30, 1942. She was a graduate of Flint Technical High School. Ruth and Charles William Meyka were married on May 20, 1951. He preceded her in death on December 20, 2009. In her early years, Ruth worked as a librarian in Flint and then, while Charles was attending Michigan State University, she worked in the bookkeeping department at MSU. In addition to raising their four daughters, she spent 18 years working as the Administrative Assistant for Cross of Christ Lutheran Church in Bloomfield Hills, a job she cherished. After spending years of family summers in Traverse City, Ruth and Charles moved permanently to their lake home in 1997. Ruth was a faithful and active member of Trinity Lutheran Church in Traverse City and participated in weekly Bible study. She was a member of the Dorcas Society, worked as one of the “Cookie Ladies” for the Trinity Cookie Sale, made quilts, and supported and participated in many other Church activities. She enjoyed playing cards, attending community events, and travelling with her many friends. Her devoted love for family resulted in their frequent visits to spend time with her in her home (which she graciously tolerated even with all the additional noise and mess). Ruth was the rock and foundation for her family, and they will always remember her big heart, strength, generous and thoughtful spirit, and her fun-loving nature. Ruth is survived by her children, Debra Ruth (David) Gift, Cynthia Marie Steinhauser, Judith Ida Meyka and Mary Susan (David) Watkeys; and her seven grandchildren and four great grandchildren, Jason (Alice) Gift Enevoldsen and their children, Vera and Ida; Ryan (Kimberly) Gift; Arin (Laura) Steinhauser and their children, Jacob and Marcus; Alex Steinhauser; Kelsey Steinhauser; David (Hayley) Watkeys and Tanner Kai Watkeys. Also surviving are Ruth’s sister in law, Janice (Trombley) Schury, and many nephews and nieces. In addition to her husband, Ruth was preceded in death by her parents, her brother Arno Benjamin Schury, her in laws Charles Henry and Augusta Ida (Fiedler) Meyka, and brother in law John Henry (Donna) Meyka. Visitation for family and friends will take place on Friday, September 6, 2019 from 4 until 7 p.m. at the Reynolds-Jonkhoff Funeral Home. The funeral service will begin at 11 a.m. Saturday, September 7, 2019 at Trinity Lutheran Church, Traverse City, with Pastor Michael Goers officiating. Visitation will also take place one hour prior to the service at church. Interment will be in Flint Memorial Park on Saturday, September 14, 2019 at 12 noon with E. Dale Evanson, Pastor Emeritus, St. Stephen Lutheran Church, Waterford, Michigan officiating. The family has asked that Ruth be remembered through memorial contributions to: Trinity Lutheran School, Trinity Lutheran Church Alms Fund or Grand Traverse County Senior Center Network.

Ruth Selma (Schury) Meyka, 90, of Traverse City, passed away unexpectedly Sunday, August 25, 2019 at Munson Medical Center in Traverse City, Michigan. She entered into the presence of her Lord surrounded by her beloved family. Born on March... View Obituary & Service Information

The family of Ruth Selma Meyka created this Life Tributes page to make it easy to share your memories.