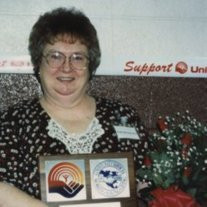 Ruth E. Montgomery, 76, of Traverse City and formerly of Kalkaska passed away Monday, January 21, 2013 at Munson Medical Center in Traverse City. Ruth was born on October 6, 1936 to the late Alvah and Genevieve (Ragan) Montgomery in Kalkaska, MI. Since childhood Ruth loved music and during her high school years at Kalkaska High she played the drums in the marching band and used her voice to proudly root for the Blazers, her team, as a cheerleader. Ruth was a skilled cook and loved to bake. These skills often led her deep into the woods where she harvested wild berries, morel mushrooms, leeks, asparagus and flowers. She taught by example and thus introduced a love for nature, hard work, and good food in all of her six berry stained faced children; whom feasted on her homemade breads, jams, pies, soups and more. Ruth made her living working for Chef Pierre in Traverse City and retired after many years of service in quality control. During these years Ruth gave of her time to the United Way, delivering food baskets to those in need during the holiday and working endlessly to raise thousands of dollars, for which she received recognition and awards. Ruth also volunteered her time answering the crisis line at Third Level Crisis Center. She was a member of AmeriCorps VISTA. After retirement Ruth went to work at the Area Agency on Aging as a secretary. Ruth was a social person and built many wonderful relationships helping people, whether delivering mail or providing a much needed conversation. She found great joy in calling Bingo for the residents at Tender Care Nursing Facility. Ruth is survived by her sons, Bill, Mike, Steve, and Tom, her daughter, Barbara, her ten grandchildren, seven great grandchildren, her beloved brother, Don Montgomery and her sister, Martha Montgomery as well as many other loving family members and friends. Ruth was preceded in death by her son, David, her brother, Gordon, her sister, Nina and both of her parents. Per her wishes cremation has taken place and no services will be held at this time.

Ruth E. Montgomery, 76, of Traverse City and formerly of Kalkaska passed away Monday, January 21, 2013 at Munson Medical Center in Traverse City. Ruth was born on October 6, 1936 to the late Alvah and Genevieve (Ragan) Montgomery in Kalkaska,... View Obituary & Service Information

The family of Ruth Montgomery created this Life Tributes page to make it easy to share your memories.

Ruth E. Montgomery, 76, of Traverse City and formerly of Kalkaska...