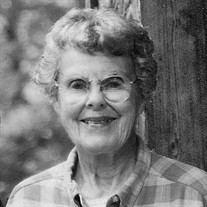 Ruth Marie Sweeney, 93, of Traverse City passed away Thursday, July 14, 2017 at Munson Medical Center, surrounded by her loving family. Ruth was born Friday, February 15, 1924 to Arthur and Florence (Lochmann) Hoffman in Collinsville, IL. She married Bernard ‘Bud’ Sweeney on May 5, 1952. During their 58 years of marriage they traveled extensively on their sailboat, as well as living abroad for brief periods in both London and Abu Dhabi. Ruth excelled at cooking and was the consummate hostess. She and Bud moved to Traverse City in 1952 and she was a member of Trinity Lutheran Church for over 65 years. Ruth was a woman of deep faith, and will be remembered for her strength, faithfulness, and consideration for others. Ruth is survived by her daughter Rhonda (Vernon) Nicholas of Traverse City; son James (Penny) Sweeney of Traverse City; brother Richard Hoffmann of Springfield, IL; grandchildren Amanda Sweeney, Connor Sweeney, Ryan Sweeney, Devon Sweeney and Renee Nicholas. She was preceded in death by her husband Bernard ‘Bud’ Sweeney, and parents Arthur and Florence (Lochmann) Hoffmann, Per Ruth’s wishes cremation has taken place. A visitation will be held on Thursday, July 20th from 5 p.m. to 7 p.m. at the Reynolds Jonkhoff Funeral Home. A memorial service will be held at Trinity Lutheran Church on Sunday, July 23rd at 2:00 p.m. Those wishing an expression of sympathy may direct contributions in Ruth’s honor to the Trinity Lutheran School, 1003 South Maple Street, Traverse City, MI 49684, or Munson Hospice, c/o Munson Regional Healthcare Foundation, 1150 Medical Campus Drive, Traverse City, MI 49684.

The family of Ruth Marie Sweeney created this Life Tributes page to make it easy to share your memories.