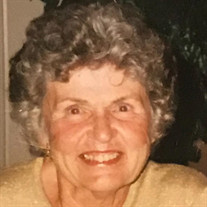 Ruth Marie Turnquist (Becker) passed from this life on February 16, 2020. She was born on April 29, 1926 in Detroit to William and Vivian Becker. She attended Cooley High School, graduating in 1943. After graduation, Ruth worked as a secretary at Ford Motor Company until the end of World War II when she married her high school sweetheart, Gordon Turnquist upon his discharge from the U.S. Army. They were married for over 67 years until Gordon’s passing in 2014. Together, Ruth and Gordon moved to Traverse City, MI in 1951 to embark on their life together. They had four children, Karen, Gary, Gail and John. Ruth suffered the loss of two of her children, with Karen’s passing as a result of an auto accident when she was only a small child and Gary, who was 38 when he lost his battle with cancer. These tragedies could have broken Ruth, but she relied heavily on her faith to see her through. Ruth was an incredibly active wife, mother, grandmother and friend. She prided herself in keeping a spotless home, as well as her gift for cooking and baking. Her family referred to her as the “queen of desserts.” Ruth delighted in hosting family gatherings, especially for birthdays and holidays. Her infectious smile drew everyone to her. She was an avid sports enthusiast, playing golf, tennis, pickle ball and table tennis. She and Gordon belonged to The Traverse City Golf and Country Club for many years. In addition, she so enjoyed playing bridge with her good friends. After retirement, they spent almost 40 winters in Florida, where they continued to pursue their love of sports and gathering with friends to dine and play cards. They settled in the Villages in Central Florida in 1999 where they enjoyed many years, but they always returned to Traverse City to spend the summer months at their home on West Grand Traverse Bay. Surviving Ruth is her daughter, Gail (George) David, son, John (Sandi) Turnquist, daughter-in-law, JoEllen Turnquist, nine grandchildren and eight great grandchildren. She was loved by them all. The family would like to extend thanks to the staff of Supportive Care at Orchard Creek Senior Living And Health Care, for the exceptional and loving care that was provided to Ruth over the last few years of her life there, as well as Hospice of Michigan who were so compassionate to Ruth and her family. Ruth was a member of the First Congregational Church for many years. A private family memorial service there is planned for this spring. Memorials may be made to The First Congregational Church Building Fund or Hospice of Michigan. Ruth and her family are in the care of the Reynolds-Jonkhoff Funeral Home and Cremation Services.

Ruth Marie Turnquist (Becker) passed from this life on February 16, 2020. She was born on April 29, 1926 in Detroit to William and Vivian Becker. She attended Cooley High School, graduating in 1943. After graduation, Ruth worked as a secretary... View Obituary & Service Information

The family of Ruth Marie Turnquist created this Life Tributes page to make it easy to share your memories.

Ruth Marie Turnquist (Becker) passed from this life on February...