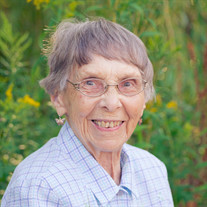 Traverse City – Ruth Miesel Worthington, 96, of Traverse City passed away peacefully on Sept 25, 2015. She lived a long, active and nurturing life up until her death. Ruth was born in Detroit on May 19, 1919 the eldest child of Rudolph and Louise Miesel. She was sister to Betty, Don and Ross, all of whom preceded her in death. She graduated from Detroit Central High School and received her Bachelors and Masters degrees from Wayne State University. She was State diving champ before it was fashionable for young women to be involved in athletics. On April 4, 1942 she married Bill Worthington at Westminster Church in Detroit. During World War II she worked in Del Rio, Texas in various capacities for the Army Air Force while Bill served his country as a training instructor. Following the War, Ruth and Bill returned to Michigan where she focused on the important responsibilities of raising a family. She opened her children’s worlds to the arts and volunteerism and had an expectation that all her children would be well educated. She returned to teaching Physical Education at Tappan Junior High School and, after completing her education, to counselling at Cody High School. For much of her life she was involved with Camp Westminster in various capacities, and also with Westminster Church of Detroit. Later in life she joined the Presbyterian Church of Traverse City. Being part of the spiritual life of the church remained a joyful part of her life up to the time of her death. For 21 years Ruth and Bill owned and operated Pineview Resort in Lewiston. They enjoyed clientele and friends and family visits and shared campfires, deer hikes, swimming and boating. Ruth and Bill retired to Traverse City where they enjoyed themselves together and with church activities, the Newcomers Club and volunteering with the Northwest Michigan Blood Program. She lost her best friend and husband of 61 years when Bill died on Jan 9, 2004. Ruth’s greatest loves and favorite times were with family and friends. Family traveled together for many memorable vacations. She was intensely interested in other people and cared greatly about all those who she knew. She was always there for her family, both for the big events and the day to day happenings. She was described by those who knew her as deeply spiritual and devoted, joyous, mindful, delightful and just plain good. She continued to love playing bridge, reading, genealogy and dark chocolate. She lived a long and quietly powerful life. Ruth is survived by her four children: Daughter Ruth Ann (grandchildren: Barry Dehlin and wife Ann St. Claire, great granddaughters Elise Dehlin and Paige St. Claire; and Jamie Dehlin), Daughter Nan (husband Dan Tholen, grandchildren Amalia and husband Austin Baldwin and great Grandsons Calder and Karsten; Elisabeth and husband Kris Hammerberg ; and Kit and wife Lindsey), Son Bill Jr. (wife Joan; granddaughter Holly and husband Glenn Gilman, great grandchildren Clayton and Savannah), Son Doug (wife Cynthia Dopp and grandsons Michael and Nicholas). Following her wishes, cremation has taken place and her ashes will be interred with Bill’s in the Memorial Garden at the Presbyterian Church of Traverse City. A Celebration of Ruth’s Life will be held at the Presbyterian Church of Traverse City on Saturday Oct 24, 2015 at 2:30 PM. A memorial contribution in Ruth’s honor may be made to the American Red Cross Northwest Michigan Blood Program, the Presbyterian Church of Traverse City or to Hospice of Northwest Michigan.

Traverse City &#8211; Ruth Miesel Worthington, 96, of Traverse City passed away peacefully on Sept 25, 2015. She lived a long, active and nurturing life up until her death. Ruth was born in Detroit on May 19, 1919 the eldest child of Rudolph... View Obituary & Service Information

The family of Ruth Marion Worthington created this Life Tributes page to make it easy to share your memories.