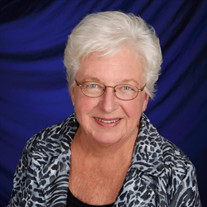 Sandra Joy Spathelf, 79, of Cedar, Michigan passed away peacefully, faithfully with dignity on December 9, 2021 with her husband of 60 years David by her side. Sandra was born on October 1, 1942 in St. Clair Shores, Michigan to Joseph William Gondeck and Deloris June Gondeck (Teachworth). The family moved to Big Rapids, Michigan a short time later. Sandi, as she nicknamed herself, attended Big Rapids Public Schools. She particularly loved her senior year in high school. She was a majorette in the marching band and also played the bassoon. She was on the student council, was editor of the student newspaper, graduated with high honors and received a scholarship to Central Michigan University. Sandi met David Eugene Spathelf at a school dance when she asked him to dance “girl’s choice”. The rest is a 60-year love story. In the fall of 1960 Sandi joined Dave, a junior at CMU. She worked part-time and also enrolled in the School of Business Executive Secretarial Program. They were married the following year on August 5, 1961 and moved into student married housing. Sandi took a new job as Executive Secretary to the Director of Economic Development and Expansion at the college. Dave continued his schooling and received a BA degree in Teaching and Master of Arts degree in Educational Administration. The couple’s first child Deborah was born the following summer. Sandi, Dave and Debbie entered the Army in 1965. They were stationed at Redstone Arsenal, Alabama. Dave served as a guided missile instructor and later as Chief of Course Development in the missile munitions center and school. Sandi enjoyed the military way of life. The friendships developed would last a lifetime. They left the service in 1968 and returned to Mt. Pleasant and CMU. Sandi again worked for the University and Dave began a teaching career. The family moved to Alma in 1969. Dave became Superintendent of Schools in 1970. Their son Bradley was born that fall. Sandi enjoyed the Alma community. She participated in all aspects of the school district. She was a member of the Alma Women’s Club, she volunteered with the Hospital Auxiliary, and was active in the PTA. She proposed the idea to the School board of having an all staff Christmas Party which the Board Members embraced. All staff attended but one who was unable to attend due to illness. It was during this period that she began spending summers with the children at the cottage on Little Traverse Lake. Dave would commute up north on the weekends. Sandi loved to fish, take the kids skiing, walk the beaches, and roast marshmallows over a campfire at night. She became “MOM” to lots of kids on the lake with her welcoming way and her famous cookies. In 1981 the family moved to Clio, Michigan in the Flint area when Dave was appointed Genesee Intermediate School District (GISD) Superintendent. Sandi liked the Flint area with its diversity, GM influence, big city shopping, and the wonderful educators in the 21 local districts. She promoted the social interaction of the 21 Superintendents and spouses in an effort to build friendships and the spirt of teamwork among all. She also enjoyed Clio Country Club, golfing in many events and watching Brad become a top-notch golfer, later to become a PGA Golf Professional. Sandi and Dave retired from GISD in 1997. She helped design a new house to replace the old cottage while searching for a winter house in Venice, Florida. Sandi and Dave really loved their winter stays in Venice. They were joined by many lifelong friends. They golfed, enjoyed beautiful beaches, attended special festivals such as the Venice Chalk Art Festival, and the Sand Carving Festival at Siesta Key. The gorgeous colored sunsets on the Gulf with a glass of wine in hand always ended a perfect day. Sandi was an avid golfer, and together with Dave, ran the Sunday couples league at Sugar Loaf for over 20 years. She also was the president of the Women’s Golf League at Sugar Loaf. Sandi had so many skills and talents. She was an exceptional seamstress, upholstered furniture like a professional, created floral designs of beauty, and became a true master gardener. Her five-foot tall geraniums were a centerpiece of the landscape at the lake. Her four-foot driftwood mirror creation was the envy of all. Sandi’s granddaughters marveled at all of her talents and they are so thankful she taught them many of her skills. Most of all Sandi was the most loving wife, mother, and grandmother to be found. Sandi is survived by her husband Dave, daughter Deborah, son Bradley, grandchildren Alexis Spathelf and Morgan Spathelf. She is also survived by her brother Paul (Sue) Gondeck and sister Penny Haven along with her brother-in law Frederick (Carol) Spathelf, and her sister-in law Martha Sands, and numerous nieces, nephews and cousins. She was preceded in death by her parents. Memorials may be directed to Munson Hospice, Leelanau Conservancy, or Leland Community United Methodist Church. The family will be conducting a celebration of her life in early summer. Kindly share thoughts and memories with her at www.reynolds-jonkhoff.com.

Sandra Joy Spathelf, 79, of Cedar, Michigan passed away peacefully, faithfully with dignity on December 9, 2021 with her husband of 60 years David by her side. Sandra was born on October 1, 1942 in St. Clair Shores, Michigan to Joseph William... View Obituary & Service Information

The family of Sandra Joy Spathelf created this Life Tributes page to make it easy to share your memories.