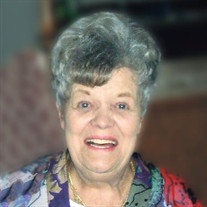 Traverse City - Sandra Diane Woehrmyer, age 77, passed away peacefully March 4, 2016. She was born in Detroit to Maurice Joseph and Angeline Alma (Betzoldt) Woehrmyer. She lived her entire life in the Detroit area until she retired from the Wayne Westland School System then moved to Traverse City to be nearer to family. She graduated from South Eastern High School in Detroit then became an airline stewardess for North Central Airlines. She loved to fly and travel, her greatest trip was to Europe on the Concord. She loved people, swim group, and red hat society where she was a member. She loved entertaining, shopping, and dressing up. She will be sorely missed by the family. She is survived by her loving Ragdoll cat “Piere,” her sister Marlene (Jim) Smith; nieces, Cathy (Dennis) Phillips, Laurie (Roy) Davis; nephew, Jeff (Stacy) Smith; cousins, Linda (Dominic) Zeppa and Kenneth Huntoon. She is also survived by many great-nieces and nephews, Audie (Jessica) Black, and Katie Black; Kayliegh, Cindy, Kyle Davis, and Harrison; great-nephews, Brandon and Tyler Smith. She was preceded in death by her mother and dad Maurice and Angeline Woehrmyer, two nieces Vicki and Cindy Smith, and long time significant other Donald Weir. A visitation will be held at the Reynolds-Jonkhoff Funeral Home on Sunday, March 6, 2016, from 4:00 pm to 8:00 pm. A funeral service will be held on Monday, March 7, 2016, with a visitation from 10:00 am until the time of the service at 11:00 am with Father Jim Hayden officiating. Memorial contributions may be directed to Hospice of Michigan, 10850 E Traverse Hwy 1155, Traverse City, MI 49684. The family is being cared for by the Reynolds-Jonkhoff Funeral Home.

Traverse City - Sandra Diane Woehrmyer, age 77, passed away peacefully March 4, 2016. She was born in Detroit to Maurice Joseph and Angeline Alma (Betzoldt) Woehrmyer. She lived her entire life in the Detroit area until she retired from the... View Obituary & Service Information

The family of Sandra Diane Woehrmyer created this Life Tributes page to make it easy to share your memories.