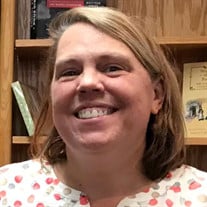 Sara Judith Boven, 46, died June 7, 2020 at home in the presence of her family. Anyone who knew Sara knew her big smile and her big laugh. Also, her big heart. She was born September 20, 1973 in Traverse City and started school at age three at the Montessori Children’s House on Seventh Street. Sara graduated from Traverse City Central High School in 1991 and continued her education at Oakland University, graduating from the University of Michigan with a major in German. She spent her junior year abroad in Freiburg, Germany, and a year in Vienna, Austria, as a Fulbright Fellow. With a master’s in teaching, Sara worked for several years with troubled youth in Grand Rapids. Then she discovered her true vocation and earned a master’s in library science, embracing the role of research librarian “to help patrons find what they need!” She worked in many different locations, including Baker College in Muskegon and Motlow State Community College in Nashville. Returning to northern Michigan in 2012, she accepted a job as director of the Benzonia Public Library. In 2014, she came home to Traverse City where she worked at Fife Lake Public Library and in the archives at Northwestern Michigan College. In 1996, Sara met her match in Derek Boven and they were married in 1998. Their lively, loving partnership was a source of mutual joy and support—and they built a rich life together in the company of French Bulldogs: Joey, Radar, Penny, and Daisy. Sara had a curious mind and a generous spirit. Her exuberance could fill a room and her quiet listening could heal a friend. At Fife Lake, she was in charge of selecting books for the library. When asked how she knew which books to choose, she said, “You’ve got to know your people.” She knew her people and they knew her. She will be deeply missed. Sara is survived by her husband, Derek Michael Boven; mother Karen Anderson (Richard Parks); father Richard Petrovich (Patricia); parents-in-law, Kathleen and David Boven; brothers-in-law, Nathan (Erica) Boven and children Alyson and Matthew; Christopher (Alexandria) Boven and son Elijah; and sister-in-law, Dawn Boven. She is also survived by an uncle, Robert Anderson (Candace), many cousins, nephews, nieces—and cherished friends Amy White, Kelaine Mish, Julie Kintner, Jen Durand, and Stacy Sharp. Sara was predeceased by her beloved grandparents Phyllis and Edward Petrovich; also by grandparents Lois and Harold Anderson. A celebration of Sara’s life will be held at a later time. Memorial Gifts may be directed in Sara’s name to the Fife Lake Public Library at 77 Lakecrest Lane, Fife Lake MI 49633 or by using the Traverse Area District Library website.

Sara Judith Boven, 46, died June 7, 2020 at home in the presence of her family. Anyone who knew Sara knew her big smile and her big laugh. Also, her big heart. She was born September 20, 1973 in Traverse City and started school at age three... View Obituary & Service Information

The family of Sara Judith Boven created this Life Tributes page to make it easy to share your memories.