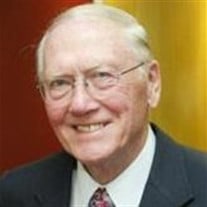 ROBERT P. GRIFFIN Died April 16, 2015 Senator Robert P. Griffin, Michigan’s Distinguished Public Servant, passed away peacefully on April 16, at the age of 91, with his wife, Marjorie, of 67 years as always near his side. He served in the U. S. House of Representatives and U. S. Senate for 22 years, and on the Michigan Supreme Court for eight years. He was born in Detroit to a blue-collar family. His father was a foreman at a Pontiac assembly plant. He was the first one in his family to go to college (Central Michigan University) and to attend graduate school (University of Michigan Law School). In between, he served in World War II in Europe, earning two Battle Stars. Thereafter, in 1947, he married the former Marjorie Anderson from Ludington, Michigan, former valedictorian of both her high school and college classes, and moved to Traverse City, Michigan, where he was a defense litigator for five years with the biggest firm in town (four lawyers). In 1955, Griffin ran for Congress, won, and drove his family (at the time, three boys aged five, three, and one) in an old station wagon tugging a U-Haul to the Washington, D.C. area to join the second term of the Eisenhower administration. He joined and led a group of progressive Republicans in the House called the “Young Turks” who engineered a leadership coup, replacing the conservative Republican Leader Charles Halleck with his good friend from Michigan, Jerry Ford. However, Griffin is perhaps best known during his 10 years in the House for the bi-partisan Landrum-Griffin Act of 1959, to this day still one of the major pieces of labor legislation. Phil Landrum (D-Ga) was the co-author and then-Senator John F. Kennedy (D-Mass) was a co-sponsor. After serving five terms in the House, Griffin announced in 1966 that he was running for the U. S. Senate. Incumbent Democratic Senator Patrick McNamara died in office six months before the election. Good friend, Gov. George Romney, appointed Griffin to fill out Senator McNamara’s term. Though trailing in the polls by 35% in what was then a heavily Democratic/pro-union state, he nonetheless came from behind and won election to the Senate in 1966 and again in 1972. He was one of the few Senators who was not independently wealthy and had to live off his salary while maintaining residences in both Michigan and the Washington D.C. area. In the Senate, Griffin served as Minority Whip for eight years under Senator Hugh Scott. He served on the Judiciary, Finance and Foreign Relations committees. Among other things, he was on the Republican Party’s short list for the Vice President slot that ultimately went to Spiro Agnew. His decision as Minority Whip to vote for President Nixon’s impeachment, according to Woodward and Bernstein’s The Final Days, was the last straw that prompted President Nixon to resign. When his good friend Jerry Ford became President, President Ford told him he would get the next U. S. Supreme Court appointment. But when the opportunity arose, President Ford, after discussing the matter with Senator Griffin, decided to give the nomination to John Paul Stevens, as Senator Griffin had led the confirmation fight against President Johnson’s nomination of Justice Abe Fortas to be Chief Justice in 1966 on ethical grounds, and they both agreed that “cronyism” was just as much of an issue in Senator Griffin’s potential nomination to the High Court. In 1976, Senator Griffin served as President Ford’s successful floor manager at the Republican Convention where Senator Griffin engineered the behind-the-scenes effort to get President Ford nominated in a most contentious battle with Ronald Reagan. In 1978, Senator Griffin lost his Senate seat to Senator Carl Levin. Afterward, he was elected to the Michigan Supreme Court where he served as an Associate Justice for eight years, replacing his former adversary and later good friend Chief Justice G. Mennen (“Soapy”) Williams, the former three-term Democratic Governor of Michigan, whom Griffin had defeated for the Senate in 1966 in a hotly contested race. Reflecting a bygone era of how politics used to be, Senator Griffin died with as many Democratic friends as Republican friends. During his 22 years in Washington, Senator Griffin had the great privilege of meeting many world leaders and celebrities, including Leonid Brezhnev, Margaret Thatcher, Pope Paul, Anwar Sadat, Golda Meir, Chou En-Lai, Bob Hope, Red Skelton, Al Kaline, Gordie Howe, Arnold Palmer, John, Robert and Ted Kennedy, and countless others. He gave Don Rumsfeld one of his first jobs on Capitol Hill as a staffer. As Minority Whip, he was invited to the White House every week for strategy meetings with Presidents Nixon and Ford. He served with six U. S. Presidents. His last visit to the White House was for President Ford’s 90th birthday party in 2003, at which Senator and Mrs. Griffin, President George W. and Laura Bush, and President and Mrs. Ford celebrated and the six of them were photographed together for the last time. Also in 2003, the State Bar of Michigan honored Congressman, Senator, and Justice Griffin with their Distinguished Public Servant Award. In 2006, the Traverse City court house in his home town was renamed the Robert P. Griffin Hall of Justice. Senator Griffin leaves his wife of nearly 68 years, Marjorie; four children, including Paul, Richard, James, and Jill; 13 grandchildren; and 7 great-grandchildren. The family would greatly appreciate, in lieu of flowers, any donations to the Robert and Marjorie Griffin Endowed Chair in American Government, Central Michigan University, Mt. Pleasant, Michigan 48859. See https://www.cmich.edu/colleges/chsbs/PoliticalScience/Griffin/About/Pages/Senator-Robert-and-Marjorie-Griffin.aspx. Public visitation with the Griffin family will take place on Monday, April 20, 2015, from 5 pm to 7 pm at the Robert P. Griffin Hall of Justice on Washington Street, Traverse City. Public services will be held on Tuesday, April 21, 2015, at 12 noon at the First Congregational Church, 6105 Center Road, Traverse City, the Rev. Gary Hogue presiding. Senator Griffin's family is being cared for by the Reynolds-Jonkhoff Funeral Home.

ROBERT P. GRIFFIN Died April 16, 2015 Senator Robert P. Griffin, Michigan&#8217;s Distinguished Public Servant, passed away peacefully on April 16, at the age of 91, with his wife, Marjorie, of 67 years as always near his side. He served in... View Obituary & Service Information

The family of Senator Robert P. Griffin created this Life Tributes page to make it easy to share your memories.