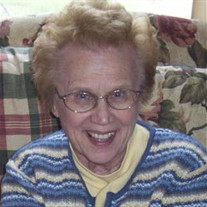 Senia Rowe, 91, of Traverse City passed away May 29, 2019, at Brigadoon Cottage at Boardman Lake Glens. Senia was born on March 10, 1928 in Demmon, near Calumet in the Upper Peninsula. Senia’s parents, Henry Kinnunen and Anna (Hiltunen) moved to the United States from Finland. Her parents were farmers but many blond and blue-eyed Finns came to the UP to work in the mines of the Copper Country. Senia graduated from Hancock High School in 1946. She learned Finnish at home just as well as she mastered English at school. Throughout her life she was known for pleasant little phrases that gave a hint to her heritage. One special evening, she attended a dance at Michigan Tech and met a handsome man named David Rowe. On July 28, 1951, the two were married in Hancock and shared over 65 wonderful years together. While he served in the army, they lived in Washington D.C. They later moved to the Flint area and started Rowe Engineering in Flushing where they raised their family. Much later, they moved to Northport and with their daughter and son-in-law, started another engineering firm (Inland Seas Engineering) in Suttons Bay and Traverse City. They settled in Northport upon their retirement. Senia was a working mom for most of her life, a secretary at Buick and secretary and bookkeeper at Rowe Engineering. She enjoyed antiquing, occasional visits to the casino, enjoying the view over the bay from their Northport home and spending time with friends. She could often be found rooting for her Detroit Red Wings and Tigers. In her younger years, she also enjoyed camping with the family at South Higgins Lake State Park and traveling around the country. She was a member of Altrusa, El Said Court, President of the Flint chapter of Eastern Star and a longtime member of the Flint Antique Study Club. She and David were members of the Elks in Traverse City, with many family gatherings held there. She was preceded in death by her husband David, in 2016 and by siblings Uno, Wilho, Edward, Hilda, Waino and Donald. Those left to cherish her memory are her children Carrie (John) Schlobohm of Flushing, Thomas, and Rebecca (Andrew) Smits: grandson Aaron Smits, all of Traverse City; brother Emil of Calumet and sister Ailie of Chassell. The Rowe family will also miss her company and her ready smile. She was the matriarch and really more of a sister than an in-law. Surviving are George Alan (Betty) Rowe of Charlevoix, John (Jean) Rowe until recently of Manistee, and Loann Rowe of Mayville. She will forever be remembered as the sweetest, most cheerful person one would be likely to meet. The family would like to thank the staffs of Munson, Munson Hospice and Boardman Lake Glens for their loving care of Senia. A memorial service will be held on Friday, June 7 at 2:00 pm at the Reynolds Jonkhoff Funeral Home with visitation beginning one hour prior. In lieu of flowers, kindly send donations to Shelly Olree’s Shelter (Animal Rescue), 21276 Northshore Dr., Hillman, MI 49746, or Munson Hospice.

Senia Rowe, 91, of Traverse City passed away May 29, 2019, at Brigadoon Cottage at Boardman Lake Glens. Senia was born on March 10, 1928 in Demmon, near Calumet in the Upper Peninsula. Senia&#8217;s parents, Henry Kinnunen and Anna (Hiltunen)... View Obituary & Service Information

The family of Senia Rowe created this Life Tributes page to make it easy to share your memories.