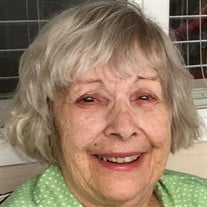 With profound sadness we announce the passing of Sharon L. Andersen (Boros), a wonderful sister, a doting aunt and friend to all whose lives she touched. She was born at home on April 22, 1940 to her parents James E. Boros Sr. and Dorothy L. Boros (Laizure). Sharon left this life the same way that she lived it, with a little spark, a lot of feistiness and on her own terms. She was a good mix of her parents. Like her father she was hard working, frugal and had that little streak of mischievousness in her that you could see in her smile. Like her mother she was kind, charitable and had a seemingly never-ending ability to care for others in need. It is no surprise given these qualities that she chose nursing as her profession. During her nursing career she especially loved working with children at Arnell Engstrom Hospital. She reached the height of her nursing career as the Assistant Director of Nursing at the State Hospital in Traverse City, MI and retired when the Hospital closed in 1989. After retiring from nursing, she was an instructor at Northwestern Michigan College, where she continued to impart to the next generation of nurses her passion for caring and serving. Sharon was a proud graduate of Mesick High School and made every effort to attend their annual class reunions. She was an exceptional student (her classmates were more than willing to tell you about it at their reunions!) and after high school she attended nursing school at Henry Ford Hospital of Nursing and years later at MSU to work toward her master’s degree. Although she was a staunch believer in hard work and saving for a rainy day, Sharon knew how to have fun too! She loved to travel and had some great tales to tell you from her many trips. She was sometimes known to be found on the golf course on a sunny day and she was a pretty mean bowler. Although she would probably not admit it, she was also addicted to romance novels and was a clothes hound extraordinaire. She will mostly be remembered by her family for her many acts of charity (from paying college tuition to helping with moving expenses to buying groceries) and the seemingly unending care that she gave to family members in need over the years with no questions asked. She was predeceased by her parents, James Boros Sr. and Dorthey Boros (Laizure), her sister-in-law Marilyn Boros, her Aunt Julia Coleman and her Aunt “Goldie” Burkhart. She is survived by her sister Joyce Dormer (Boros), her brother James Boros Jr., her niece Melissa (Jason) Warren and their children Jaren and Aiden, her niece Janeen Westrick (Boros) and her children Mackenzie and Lachlan, her nephew Brian Boros, and her dear cousin James Burkhart along with other cousins. An outdoor memorial will be held in the spring. The family would like to extend many thanks to the caregivers at Munson Hospice House for the care and love they extend to their patients and the families that come into their lives. Please share a memory with Sharon’s family by visiting her tribute page at www.reynolds-jonkhoff.com. The Reynolds-Jonkhoff Funeral Home and Cremation Services is serving the family.

With profound sadness we announce the passing of Sharon L. Andersen (Boros), a wonderful sister, a doting aunt and friend to all whose lives she touched. She was born at home on April 22, 1940 to her parents James E. Boros Sr. and Dorothy L.... View Obituary & Service Information

The family of Sharon L. Andersen created this Life Tributes page to make it easy to share your memories.

With profound sadness we announce the passing of Sharon L. Andersen...