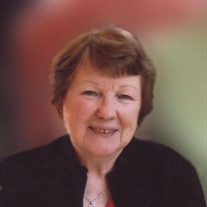 Traverse City--Sharon Lou (Price) Workman, a new resident here who formerly lived 20 years in Mason, died on June 24, 2020 at the age of 89. She was born June 3, 1931, in Pontiac, MI, the oldest of five children of Marvin and Agnes Price and spent her childhood in Berkley, MI just north of Detroit. She graduated from high school in 1949. She met her husband Philip F. Workman in 1950 while both worked at the Daily Tribune in Royal Oak, MI. They were married March 25, 1953 and raised five sons and one daughter while living in Berkley, West Bloomfield and Okemos MI. After the family was grown, she decided to go back to school to finish her degree. She attended Oakland Community College, Oakland University and Michigan State University, earning a BA in psychology from MSU in 1986. She then worked as a clinician for Ingham County Mental Health until retiring in 1992. She and her husband enjoyed travel in retirement, frequently visiting family in California and elsewhere. She also took up playing the piano again after retiring, taking weekly lessons for 14 years. She treasured moments with a Wednesday morning coffee group of friends from East Lansing University United Methodist Church who became real pals over the years. Her family was her pride and joy and her grandchildren and great- grandchildren made life special. She was a member of First United Methodist Church of Mason and the American Association of University Women. She is survived by her husband of 67 years, Phil; sons Greg (Sue), Loveland OH, Jeff (Deb), Traverse City, Tim (Celia), Aliso Viejo CA, Randy (Lisa), Aliso Viejo CA, and daughter Krista Martinez (Tonio), El Segundo CA; brothers Gary (Sue) Price, Port Charlotte FL, Kevin (Ellen) Price, Berkley, sister Marilyn Green, Big Rapids, MI, 12 grandchildren and five great-grandchildren. She is predeceased by her parents; a son Matthew, Berkley; a brother and his wife, Stuart and Joann Price, Berkley, and her brother-in-law Donald Green, Big Rapids. The family will plan a later memorial service. Memorials may be made to First United Methodist Church of Mason or the Greater Lansing Food Bank. The family is also grateful to Munson Healthcare Hospice for its kind and loving care these recent weeks. Kindly share thoughts and memories at www.reynolds-jonkhoff.com.

Traverse City--Sharon Lou (Price) Workman, a new resident here who formerly lived 20 years in Mason, died on June 24, 2020 at the age of 89. She was born June 3, 1931, in Pontiac, MI, the oldest of five children of Marvin and Agnes Price and... View Obituary & Service Information

The family of Sharon Lou (Price) Workman created this Life Tributes page to make it easy to share your memories.