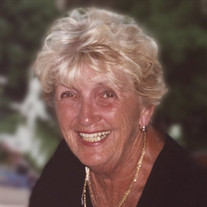 TRAVERSE CITY - My beautiful sister, Shirley Mae Sobbry Shumsky Green, passed away at Munson Hospice House on Thursday night, October 2, 2014. She was born in Chicago, Illinois, on October 29, 1932. Our parents were Frank H. Sobbry and Lena Nell Derman Sobbry. Our mother was just 16 years old when Shirley was born and shortly after, our parents moved to Northern Michigan, permanently residing in the little town of Elk Rapids. In the following years, her three sisters, Bonnie Lee, Sharon Marlene, and Terry Louise were born. Shirley was a graduate of the Elk Rapids High School Class of 1950. She was active in cheerleading, and during her senior year, was chosen as Miss Elk Rapids 1949. She also worked part-time at Koontz Drug Store, and we loved it because it meant we had ice cream treats from the soda fountain regularly. As the years followed, our parents were divorced and remarried, and we were blessed with an extended family of half brothers and sisters. From our mother’s side; John L. Ferrell. From our father’s side; Francis, Melvina, Ron, Mary, Frank, Carol, and Dale Sobbry. In 1951, she married Richard Shumsky, the handsome basketball star from Suttons Bay. Together they had four children; Richard Wayne, Patricia Lynn, Betsy Sue, and Connie Jo. Shirley was very involved in her children’s lives and in the community. On top of being a mom, she was a switchboard operator for Michigan Bell. I used to tease her about saying “number please” and called her when I came home from school just to hear her say it. Richard and Shirley were married for 19 years, but sadly their marriage ended in 1971. Richard preceded her in death in 2012. Shirley remarried in 1979 to David E. Green, and they moved to Florida in 1980. Shirley’s work career consisted of 14 years at Key II in Elk Rapids (1966-1980) and 14 years with WalMart in Florida and Traverse City (2000-2014). Shirley was proud of her years of service to the Elk Rapids community as an Emergency Medical Technician (EMT). She was also a member of the Elk Rapids Business and Professional Women’s Foundation (BPW). She and David were motel managers in Winter Garden, Florida and Traverse City, Michigan. They were both active in the Elks Club of Sanford, Florida. She had a love for playing BINGO at any and every opportunity. She loved her life in Florida as three of her children and her grandchildren lived close by. Her life changed again when her husband, David, died in 2005. After almost 30 years away from her Northern Michigan family, she moved to Traverse City in 2010 and continued her career at WalMart. She loved her job and everyone loved her. She had a quick wit, keen sense of humor, and loved to laugh and make others laugh with her. She thrived interacting with the public. Her WalMart family was important to her. She was diagnosed with lung cancer on August 1, 2014, and took a medical leave on August 27, 2014. Her last day at work was the last day her WalMart family saw her. I understand she is up for WalMart’s Star Cashier of the Month. She would have been so proud. Shirley was pre-deceased by her parents; sister Sharon, and half-siblings Francis and Melvina. She is survived by her large loving family; her siblings, children, 15 grandchildren, 12 great-grandchildren, and several nieces and nephews. Cremation has taken place with no services planned, per her request. Her family is planning a summer, 2015, celebration of her life. The family would like to extend our thanks to the Oncology staff at Munson Medical Center as well as Munson Hospice House. Sis, I have tried to leave your family and friends a timeline of your life. It is the only gift I have left to give you. Thank you for being my sister and friend all the years of my life. Give Billy a hug for me. I shall see you in my dreams. With love, Bonnie Lee. Please feel free to share your thoughts and memories with Shirley’s family by visiting www.reynolds-jonkhoff.com. The family is being served by Reynolds-Johnkoff Funeral Home and Cremation Services.

The family of Shirley Mae Green created this Life Tributes page to make it easy to share your memories.