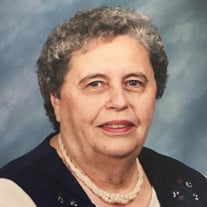 Shirley Ann Hamilton, 85, of Traverse City, passed away on June 18, 2015. Shirley was born on January 11, 1930 in Traverse City, to her parents the late Frederick Ward and Lila Marie (Taylor) Round. She married Leonard L. Hamilton on September 24, 1950 in Traverse City. The couple celebrated 61 years of marriage together and raised their two children, Jean and Larry. Shirley was employed by "Ma Bell" Telephone Company for 30 years in Traverse City before retiring in 1985. She was a member of the Telephone Pioneers of America, and The Blue Jay Camping Club. She enjoyed knitting, square dancing, snowmobiling and camping in their 5th wheel trailer and not spending winters in Michigan. Leonard often remarked that Shirley was his "living compass" and always kept him from getting lost, especially when snowmobiling. She had been a member of the Williamsburg United Methodist Church. Shirley is survived by her children; daughter, Jean (Denny) Vallad of Clarkston, MI; son, Larry (Vickie) Hamilton of Traverse City; grandchildren, Nicole (Tom) Stefanac of Fenton, Allison (Todd) Murphy of Fort Gratiot, Lisa Vallad of Denver Co.,and Kelli Hamilton of Ludington; great-grandchildren, Sophie and Norah Stefanac, Ryan and Paige Murphy, and many nephews, nieces and cousins. She is preceded in death by her parents, husband Leonard (March 2013), and brother, Ren Round (March 2000). A memorial service will be held at 12:00 p.m. on Monday, August 17, 2015, with visitation held one hour prior at The Traverse Bay United Methodist Church, 1200 Ramsdell Rd. Traverse City, MI. 49684. Pastor Jane Lippert and Pastor Nate Starkey will officiate the service. A luncheon will be held following the service. Per Shirley's wishes, cremation has taken place and Shirley has been laid to rest with her husband at Acme Township Cemetery. In lieu of flowers please consider donations in Shirley's name to the Salvation Army of Traverse City and Hospice of Michigan. Please share your thoughts and memories with Shirley's family by way of her online guestbook at www.reynolds-jonkhoff.com. The family is being cared for by Reynolds-Jonkhoff Funeral Home and Cremation Services.

Shirley Ann Hamilton, 85, of Traverse City, passed away on June 18, 2015. Shirley was born on January 11, 1930 in Traverse City, to her parents the late Frederick Ward and Lila Marie (Taylor) Round. She married Leonard L. Hamilton on September... View Obituary & Service Information

The family of Shirley Ann Hamilton created this Life Tributes page to make it easy to share your memories.

Shirley Ann Hamilton, 85, of Traverse City, passed away on June...