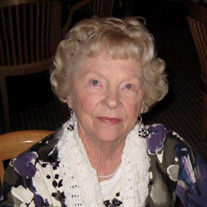 Shirley M. Judd Looney, 96, of Acme passed away peacefully at her residence at Boardman Lake Glens. Shirley was born October 25, 1925 in Stambaugh in the upper peninsula of Michigan to the late Edwin J. and Elsie Anderson. She was a member of the generation that was born in the Roaring Twenties, raised in the Depression years and witnessed the effects of a world war. Love came her way in 1947 when she married returning Navy man James (Jimmy) Judd of Cheboygan, MI. There they raised their two girls, Lynn and Barbara. Cheboygan would be home until work relocated them to the Traverse City area in 1967. While raising her family Shirley received her Bachelor’s Degree from Central Michigan University in Elementary Education. She began teaching in a one-room school house in Cheboygan and upon to moving to Traverse City she continued her career for many years at St. Francis. Life took a dramatic turn with the early passing of her husband Jimmy in 1975. She found solace in Catholicism and attended both St. Francis and later Christ the King. In 1979, Shirley married Derril Looney whom she had known as a young girl in the Upper Peninsula. They spent their retirement years between Acme and Bradenton, Florida. He passed away in 2000. Building relationships seemed easy for her and she had a wide range of close friendships. In her free time she enjoyed golfing, shopping and playing bridge. Weekends often included the Saturday night dances at the Senior Center or going to dinner at the Elks Club. She also contributed to the community through her volunteer work at the Governmental Center Information Desk, the Dennos Museum and Munson Medical Center. We would like to thank the staff and community at Boardman Lake Glens for their extraordinary care and friendship especially during the Covid crisis. Thank you as well to Hospice of Michigan for making her final days comfortable and peaceful. A special thank you as well to her many former students who took the time to say hello and reminisce of their days in the classroom with her. It would always be the highlight of her day. Shirley is survived by her daughters Lynn (Gerry Patronite) Cram and Barbara (Dennis) Piskor, her loving grandchildren Jennifer Cram and Stephanie (John) Cieszkowski, Jess (Michelle Ferrarase) Piskor, Laura (Patrick LaFlamme) Piskor and great grandchildren Rudy, Etienne, Polly and Luca. Interment will take place at the Pine View Cemetery in Cheboygan at a later date. Memorial contributions may be directed to a charity of your choice.

Shirley M. Judd Looney, 96, of Acme passed away peacefully at her residence at Boardman Lake Glens. Shirley was born October 25, 1925 in Stambaugh in the upper peninsula of Michigan to the late Edwin J. and Elsie Anderson. She was a member... View Obituary & Service Information

The family of Shirley M. Judd Looney created this Life Tributes page to make it easy to share your memories.

Shirley M. Judd Looney, 96, of Acme passed away peacefully at...