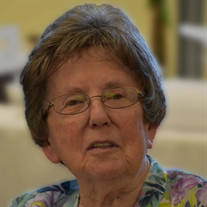 Shirley Ruth Fleischer Smith was the first-born child of her parents, Anthony and Selma Fleischer. She was born at a time when cars were in their infancy, the Ten Commandments was showing on the big screen, Disney Brothers Cartoon Studio was founded, and Time Magazine published its first issue, among a host of other notable things. Also, the year she was born, the first baseball game was played at the Yankee Stadium. In her later years, Shirley was an avid fan of the Detroit Tigers. Shirley met Leonard Smith in their teen years through their Baptist church. Shortly after high school graduation, they married, but too soon, the rumblings of WWII interrupted their newly married bliss, and Leonard was sent to war. Shirley gave birth to their firstborn son, Dennis while Leonard was in the South Pacific. Shirley’s 98 ½ years took her through many life changes. She bore three children, a son and two daughters, moved several times across town and her last move took her across the state. Her eleven grandchildren and step-grandchildren gave her so much joy, and she lived long enough to know of the blessing of twenty-three great-grandchildren and step-great-grandchildren. Shirley loved to hear stories. If you met her for the first time, she would want to know all about your life. She didn’t talk much about her own. Even her children had to pry her stories from her, but she remembered every person she talked to and held a genuine interest in their lives. So many people loved her, which would have surprised her to know. She didn’t ask questions to be liked. She just wanted to know you better. Shirley had a fun sense of humor, but she had her anxious moments too. Perhaps it was all those things she lived through that she couldn’t control, like the Cold War, WWII, the threats of nuclear weapons, the Great Depression, and their own personal job losses, but Shirley did fret a bit. She also tried to fix it, and if she was able, she dug in and did what had to be done. When Leonard was out of work, she went to work to help. Shirley was also a woman of prayer. She and Leonard spent their lives reading the Scriptures and praying for every single member of their family. That is a priceless legacy. Shirley was preceded in death by her beloved husband Leonard. They almost made it to 70 years of marriage, but he couldn’t quite live that long. She was widowed for over ten years. She was also preceded in death by her firstborn and only son, Dennis Smith, who passed away in July 2021. Those living who are grieving her loss are her daughter Elaine (Scott) Bills, who cared for Shirley for the last 2 ½ years of her life in their home. Her daughter Jill (Randy) Smith, who kept her busy playing Words with Friends and took her shopping and out to lunch back when she could, and Barbara (daughter-in-law). Her grandchildren: Jane (Tim) Selberg, Stephen (Meagen Kucaj) Smith, Bethany (Josh Schoof) Willick, David Willick, Jeff Smith, Christopher (Molly DuBois) Smith, Ryan (Carissa) Galloway. Step grandchildren: Heather (Joe) Schmittdiel, Samuel (Rosie) Bills, Nathan (Bethany) Bills, Jacob Bills. Her great-grandchildren: Angela Malek, Elise Selberg, Luke Selberg, Archie Smith, PV2 Nicholas Whipple, Keaton DuBois-Smith, Jade Galloway. Step great-grandchildren: Ethan Schmittdiel, Emma Schmittdiel, Jack Schmittdiel, Henry Schmittdiel, Lucy Schmittdiel, Eisley Bills, Moses Bills, Harper Bills, Sylvan Bills, Kendall Bills, Graycee Bills, Hayden Bills, Hadleigh Bills, Phalyn Bills, Saniyah Bills, Darryl Bills. Visitation will take place on Sunday March 13, 2022 from 4-6pm at Reynolds Jonkhoff Funeral Home. A funeral service will take place on Monday March 14, 2022 at 11:00am also at the funeral home with visitation from 10:00am until the beginning of service. A committal service will take place on Wednesday March 16, 2022 at 11:00am at Cadillac Memorial Gardens Cemetery in Clinton Township. In lieu of flowers, those wishing an expression of sympathy may want to contribute to Faith Reformed Church or Samaritan's Purse in Shirley's honor. We all grieve, but not as those who have no hope. We know Shirley is more alive today than she was on this earth, enjoying the beginning of eternity with Jesus. Shirley and her family are being cared for by the Reynolds Jonkhoff Funeral Home.

Shirley Ruth Fleischer Smith was the first-born child of her parents, Anthony and Selma Fleischer. She was born at a time when cars were in their infancy, the Ten Commandments was showing on the big screen, Disney Brothers Cartoon Studio was... View Obituary & Service Information

The family of Shirley R. Smith created this Life Tributes page to make it easy to share your memories.

Shirley Ruth Fleischer Smith was the first-born child of her...