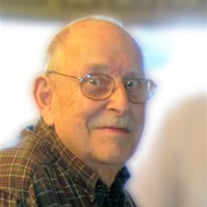 Stanley Jay Hyman II, 78, of Traverse City Michigan passed away peacefully at home on Thursday, Dec. 17, 2015. He was born on Aug. 16, 1937 in Detroit to the late Stanley Jay and Eva F. Hyman. Stan graduated from Cass Tech High School in June 1955 and in August of the same year started a 38 year career at Michigan Bell Telephone Co; retiring in 1993. Stan met his future wife on the telephone at the telephone company. He married Peggy Ringe at Nardin Park Methodist Church in Detroit on August 22, 1958. In 1966, Stan earned a Bachelor of Science Degree in Electrical Engineering from Lawrence Institute of Technology. This was accomplished the hard way by working full time and attending night school. Together, he and Peggy raised three children, living in Detroit, Redford Township and Livonia before relocating the family to Traverse City in 1976. He always and often said it was the best move he ever made! Stan had many interests; however, his passion was aviation. His mother encouraged him to build model airplanes during his childhood and this led to his lifelong hobby of radio controlled aircraft. He was an active member of the TRaverse Area Model Pilots Society (T.R.A.M.P.S) for 38 years and was known for his unique and original flying creations. Sandy the flying Witch was featured in many model airplane shows, as was his flying Cherry. His latest endeavor was a flying Pizza Box and yes it is a real carryout cardboard box! Not just content with model aviation, Stan proudly obtained his private pilot license in 1996. Many may remember Stan as the guy who dressed up at Christmas in his red Santa suit, complete with bucket of candy canes, bringing cheer to all the business establishments he frequented during the year or as the Hobo with scary mask who handed out candy at the annual Downtown Halloween Walk. Stan also was the “Wednesday Guy” at the local downtown hobby shop. When he worked, the prices were always better! Stan truly embraced people and will be remembered for his kind heart, generosity and sense of humor. Stan is survived by his loving wife of 57 years, Peggy; three children: Kevin (Carolyn Denny) of Interlochen, Curtis of Kokomo Indiana, Kristy (Todd) Coffey of Albuquerque New Mexico; and four grandchildren Noah and Mary Ingrid Corning-Hyman, Silvia and Baxter Coffey. He is also survived by his brother David (Carolyn) of Alpharetta Georgia; brother-in-law and sister-in-law Matt and Nancy Lucas of Farwell; two nephews and one niece; and beloved cats Abby and Angel. An Informal Celebration of Stan’s Life will be held on Tuesday, December 29, 2015 from 3 PM to 7 PM at Reynolds-Jonkhoff Funeral Home in Traverse City. Come and share your memories with the family or visit his online guestbook at www.reynolds-jonkhoff.com. In lieu of flowers, the family suggests donations to the Munson Dialysis Center (4062 West Royal Drive, Traverse City, MI 49684) or any charity of your choice. The family is being cared for by Reynolds-Jonkhoff Funeral Home and Cremation Services.

The family of Stanley Jay Hyman II created this Life Tributes page to make it easy to share your memories.