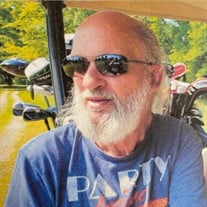 Stanley John Pirozek Jr, 67, of Kingsley, passed away unexpectedly at Munson Medical Center. Stanley was born on July 11, 1954 in Detroit, MI to the late Stanley and Doreen (Lyall) Pirozek. He married Beverly Ann Delikta on February 13, 1976 in Allen Park MI. Together they raised two wonderful children, Stanley and Angela. Stanley worked at BASF (25yrs) and was a member of the UAW Local 247. After moving to Northern Michigan he was employed at Tower Automotive for 10 yrs. In his spare time he enjoyed golfing, bowling, watching sports and westerns. He especially enjoyed video poker and going to the casino. Stanley was a handy man and could fix anything. If he didn’t know how he would make some calls to make it happen. He loved his classic car, a 1969 GTX that he owned when he was younger. Stanley was a wonderful husband, father, family member and friend. His can do Mr. fix it attitude will be forever missed by all who loved him. Surviving Stanley is his wife Beverly of 45 devoted years, son Stanley, daughter Angela, his fur babies, Mara and Geese, siblings Pamela Vardas, Sarah (Daniel) Wager, Russell (Tina) Pirozek, Lynn (John) Webb, sibling in-laws, Leonard (Cindy) Delikta, Donna Klarr, and Sharon Maynard along with 81 nieces and nephews and many friends. Stanley is preceded in death by his parents and brothers-in-laws James and Carl Delikta. Funeral services will take place at 11am on Friday, October 1, 2021 at the Reynolds-Jonkhoff Funeral Home with a visitation held one hour prior. Memorial contributions may be directed to his family. Kindly share thoughts and memories at www.reynolds-jonkhoff.com.

The family of Stanley John Pirozek Jr. created this Life Tributes page to make it easy to share your memories.