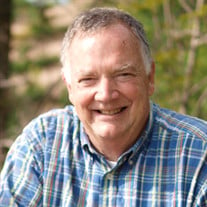 Stephen Keeler Schwaiger, 72, of Maple City, Michigan, was welcomed home into the loving arms of his Heavenly Father on Thursday, January 30, 2020. Steve was born on February 13, 1947, in Indianapolis, Indiana, to the late Henry and Beverly (Keeler) Schwaiger. He spent his childhood years in Marion, Indiana. In 1965, Steve graduated from Culver Military Academy in Culver, Indiana. He later attended Purdue University, receiving a Bachelor’s Degree in Aeronautical Engineering. Steve also proudly served his country in the U.S. Air Force Reserve. On July 18, 1970, he married his Purdue sweetheart, Gretchen Hopple, in Toledo, Ohio. Steve began work in the HVAC industry as a sales engineer for American Air Filter, but soon transitioned to management, which allowed him to live in several states before settling in northern Michigan as manager for the Behler-Young Company’s Traverse City branch. Steve finished his career with Williams Distributing in 2009 and retired to more fully appreciate his time with family and friends and enjoy the summers and sunsets that had drawn him to the area decades before. He never passed up an opportunity to get out on the water with family or to grill a meal on the household deck. Steve loved to spend time on that deck, watching the birds at his feeders and taking delight in the sweeping views he had of Glen Lake, the Dunes, South Manitou, and Lake Michigan. Steve’s strong Christian faith was the center of his life. He was an active member of Glen Lake Community Reformed Church. Through the church, he helped start Leelanau County HelpLink, as well as Neighbors Helping Neighbors, a group that was initially formed to help those impacted by the storm that hit in August of 2015. He truly enjoyed the Saturday morning men’s Bible study group that he and friend Art Gosling were instrumental in starting about 30 years ago. He had a deep love for all, and, in keeping with Jesus’ parable of the Good Samaritan, considered everyone his neighbor. Steve is survived by his loving wife of 49 years, Gretchen; four beloved children, Scott Schwaiger, Kim Schwaiger, Jeffrey (Zane) Schwaiger and Ken Schwaiger; and four precious grandchildren, Cora Schwaiger, Amabel Schwaiger, Ellen Schwaiger and Wallace Schwaiger, who knew him as their “Boppa”. Also surviving are his brother, Dave (Pat) Schwaiger, and his sister, Cindy (Amos) Lemons, as well as many nieces and nephews. A service of remembrance and celebration honoring Stephen will take place at 11:00 a.m., visit with the family starting at 10:00 a.m., on Saturday, February 8, 2020, at the Glen Lake Community Reformed Church, 4902 W. MacFarlane Rd, Glen Arbor, MI 49636. Pastor Dan DeVries will officiate. In lieu of flowers, those planning an expression of sympathy may wish to consider a memorial donation to Glen Lake Community Reformed Church (or to Glen Lake Community Reformed Church and designated for HelpLink), 4902 W. MacFarlane Rd, Glen Arbor, MI 49636. Please feel free to share your thoughts and memories with Steve’s family on his tribute page at www.reynolds-jonkhoff.com. The family is being cared for by the Reynolds-Jonkhoff Funeral Home and Cremation Services.

Stephen Keeler Schwaiger, 72, of Maple City, Michigan, was welcomed home into the loving arms of his Heavenly Father on Thursday, January 30, 2020. Steve was born on February 13, 1947, in Indianapolis, Indiana, to the late Henry and Beverly... View Obituary & Service Information

The family of Stephen K. Schwaiger created this Life Tributes page to make it easy to share your memories.