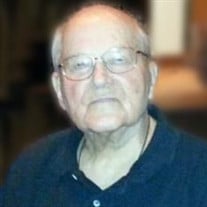 Steve J. Veres Sr., 92, of Traverse City, passed away Wednesday, March 20, 2019 at French Manor South with his daughter, Eva, and son-in-law, Tom, by his side. He was born Sept. 1, 1926 in Atyha, Romania to the late Moses and Anna (Simu) Veres. Steve also had a brother Moses Jr., of Romania, who preceded him in death. He married his one and only true love, Eva Varga, on September 30, 1950. Sadly, the love of his life passed away on March 26, 2010, only months before reaching their 60th year of wedded bliss. Together, Steve and Eva had two children, Eva (Evike Veres) Pointe, and Steve Veres Jr., who also joined his mom, Eva, in the home of the Lord on December 31, 2013. Steve Sr.’s bravery knew no bounds. He volunteered in the Hungarian army as a Freedom Fighter for his beloved homeland. He heroically fought against communism during the 1956 Hungarian Uprising. Upon experiencing the devastation of the revolution Steve Sr., his wife, Eva, and their young daughter, Evike, fled with other refugees from their country to the United States to embrace the freedoms of all Americans. Once arriving in this “new world”, Steve Sr. was hired at the Rawsonville Plant of the Ford Motor Company where he worked as a machine repairman in skilled trades for forty years. His ability as a “Mr. Fix-It” was legendary. Not only was he good with his hands but his creative ideas for increasing production were welcomed at Ford as well. Steve Sr. was in fact rewarded on countless occasions for his “genius” by Ford Motor Company. Steve Sr. had a wealth of knowledge. He was both a history buff as well as a storyteller. If he was asked about a historical figure, event, or article, those nearby were compelled to listen. In addition, his storytelling carried over into his humor. He had a way with words that could fill a room with laughter. Steve Sr. was a sports enthusiast. He followed both soccer and hockey religiously. As a loyal Red Wing fan, he coached the team regularly from his recliner wearing his “wing-nut” headpiece in support of his favorite team. As a man of integrity, Steve Sr. inspired and encouraged others to be the best that they could be. His guidance, strength, and understanding touched and brought comfort to those who were in his presence. The kindness he showed, the love he shared, and the happiness he brought will always be remembered. Steve Sr. will forever have a cherished place in the hearts of those who were blessed to have known this incredible man. Both a gentleman and a gentleman, Steve Sr. was charming yet humble. He was a “sweet talker” especially when it came to the ladies. Most recently, he made a lasting impression on the amazing caregivers at the French Manor South. Steve Sr. displayed his heartfelt gratitude daily to this team who cared for him so well. He appreciated the empathy, concern, assistance, and love given to him during this last stage of life. In addition, Steve Sr. was grateful to Heartland Hospice and Chronic Care for their cooperative effort in making him comfortable in his transition from this world to the next. Losing a father is one of the deepest sorrows a heart can know. Those who remain here without Steve’s presence are sad to experience the loss but rejoice that he is safely tucked in now. Steve Sr. is now with Jesus. He has joined his wife, Eva, and his son, Steve Jr., in the house of the Lord. Surviving Steve Sr. are his daughter, Eva (Thomas) Pointe of Traverse City, sister-in-law Marta Mohaczi of Saline, nephew, Steven Harkabusz of Ann Arbor, brother-in-law, Gyula and nephew, Gyuci Risz, both of Budapest, Hungary. A memorial gathering to celebrate Steve’s life will take place on Thursday June 13, from 4 to 6pm at the Traverse City Elks Lodge #323. A memorial service will begin at 4:30pm led by Fr. Kenneth Stachnik. Kindly share thoughts and memories with Steve’s family at www.reynolds-jonkhoff.com.

The family of Steve J. Veres Sr. created this Life Tributes page to make it easy to share your memories.