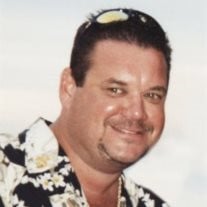 Steve J. Veres, Jr., 51, of Traverse City, formerly of Belleville, Michigan, passed away peacefully at home on December 31, 2013. Steve was born on April 13, 1962 in Lincoln Park, Michigan to Steve and Eva (Varga) Veres. He received his Bachelor's Degree in Business Administration from Eastern Michigan University. He had been employed by Ford Motor Company until retiring in 2010. Steve was a sports enthusiast. He knew about every game, team, and player, whether it be football, hockey, baseball, or basketball. He also expressed his interest through his diverse collection of sports memorabilia. Steve was an avid fan of both Michigan college teams, U of M and MSU. Rarely would you see Steve without his beloved “maize and blue” knitted headband. He would have also loved to watch MSU beat Stanford in this year's Rose Bowl. Steve was never a “silent observer”. He could spark up a conversation with anyone. He was always generous with what he had and often shared this with others. He had a quirky sense of humor and loved to play practical jokes. He never married but was always looking for “the right girl”. Since his Mom passed away three years ago, he grew his hair longer. He did this as a tribute to her so he would never forget that she had lost her hair due to cancer before her passing. While young, he was free-spirited, going forward without any regrets. He settled down more and more however as he approached middle age. He was known as “Steve-O” by many who were close to him while he called his big sister, “Sis” and his brother-in-law, “Tom-O”. After his mom passed away, Steve move to Traverse City to help take care of his dad as well as to keep his dad company. Steve's unexpected passing has left his family with inconsolable grief. Even though Steve might say, “Miss me but let me go”, the family will forever keep Steve in their heart. Steve is survived by his father, Steve Veres, Sr., a sister, Eva (Tom) Pointe, an aunt, Marta Mohacsi, and a cousin, Steve Harkabusz. He was preceded in death by his mother, Eva Veres. A memorial service honoring Steve will be held at 3:00 p.m. on Wednesday, January 8, 2014 at the Reynolds-Jonkhoff Funeral Home, 305 Sixth St., Traverse City. Father Kenneth Stachnik will officiate. There will also be a visitation one hour prior to the memorial service. Those planning an expression of sympathy may consider memorials to Holy Cross Hungarian Roman Catholic Church, 8423 South Street, Detroit, MI, 48209 or St. Francis Catholic Church, 1025 S. Union Street, Traverse City, MI 49684. Please feel free to share your thoughts and memories with Steve’s family at www.reynolds-jonkhoff.com. The family is being served by Reynolds-Jonkhoff Funeral Home and Cremation Service.

The family of Steve J. Veres Jr. created this Life Tributes page to make it easy to share your memories.