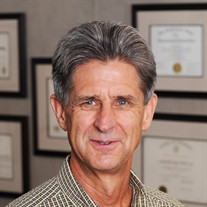 Steven “Seve” Paul Grossnickle, 72, of Cedar, MI (formerly Winona Lake, IN) passed away August 27, 2019, with his family by his side. Seve was born September 18, 1946 in Wabash, IN to parents Paul and Mary Jane (Stukey) Grossnickle. After graduating from Warsaw High School, Seve earned an undergraduate degree at DePauw University where he was involved as an Alpha Tau Omega fraternity brother and a member of the Phi Beta Kappa Honors Society. Afterwards, he attended medical school at Case Western Reserve in Cleveland, OH. On rotation in his residency, he would meet his future wife, Loretta “Lori” Briggs, in the NICU unit. They moved to Bremerton, WA where he served active duty in the Navy for two years followed the six years in the Naval Reserves. Following his service, he and Lori moved to Warsaw, IN. Seve began his ophthalmology practice, expanding upon his father’s optometry business to form Grossnickle Eye Center [GEC] later to be joined by his brother, Bruce. He was a true visionary. He not only helped create a successful, reputable eye center with multiple locations in Northern Indiana, but helped shape the culture at GEC—a place where people feel like family. He enjoyed a prolific career as a well-known and respected surgeon. Saying Seve was passionate about being an ophthalmologist would be an understatement. He loved his career and helped thousands of people with their vision through his precision as a surgeon. He possessed a kind, generous heart and genuine interest in his patients’ well-being. Seve loved spending time with his family. He was so proud of his children. Seve had a passion and a zest for life, he loved being goofy, he was sweet and charming, you could always count on him for a good joke, and he had a contagious laugh. He brought so much light and laughter to everyone around him. Seve always found a hobby to take up throughout life from brewing beer, bootlegging whiskey, silk-screening t-shirts, making wood pens, and working on puzzles. Seve also enjoyed flying his Cessna 210 with his dad, competitive dancing (triple step, triple step), playing wallyball, golfing, and spending time at the beloved cottage—“For the Good Times”—on Little Traverse Lake where countless memories were made. He truly had a love for Northern Michigan and had developed a love for wine. In 2006, Seve purchased a 100-acre parcel in Leelanau County to start 45 North Vineyard & Winery where he instilled that same sense of family that had been established at GEC. To his delight, his kids all eventually moved to Northern Michigan. They enjoy great success at the winery today—truly a legacy to leave. After retirement in 2012, Seve and Lori moved Up North permanently in 2014. Seve leaves behind his wife Lori; children Brian (Hildy), Eric (Alanna) and Katie; grandchildren Mica, Kati, and Maren; brother Bruce (Jeanne) Grossnickle; nephews and niece David, Mark, and Jaimie; as well as his amazing caregivers Tom Crain and Ted Bartleson, and so many lifelong friends. He was predeceased by his parents. A celebration of life will take place at a later date at the winery and in Indiana. In lieu of flowers, memorials in Seve’s honor may be directed to The Association for Frontotemporal Degeneration (AFTD), at Radnor Station Building 2, Suite 320, 290 King of Prussia Road, Radnor, PA 19087, or online at https://www.theaftd.org/get-involved/ways-to-give/. Donations can also be made to Orchard Creek Supportive Care, at 9723 E Cherry Bend Rd, Traverse City, MI 49684, whose staff provided exceptional care to Seve over the past several years; or Hospice of Michigan, 10850 E. Traverse Highway #1155, Traverse City, MI 49684. Seve and his family are being cared for by Reynolds-Jonkhoff Funeral Home and Cremation Services.

The family of Steven "Seve" Grossnickle created this Life Tributes page to make it easy to share your memories.