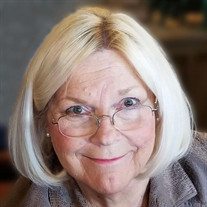 CEDAR - Susann “Susan” Delores Bugai, 74, of Cedar, Michigan, died January 31, 2022, with her loving family by her side. Born February 4, 1947, in Reed City, Michigan, to Joseph Sr. and Leona (Ketchum) Vask. Susann graduated from Fairgrove High School in Fair Grove, Missouri. Her childhood and adolescent years were spent in several locations across the United States, including California, Arizona, and Missouri. Eventually Susann’s family settled back in Michigan, where she went on to marry her husband Donald L. Bugai, on March 1, 1974. Donald and Susann built a beautiful life of farming and raising their sons in Cedar, Michigan. The two were happily married for over 47 years before Donald was called to heaven on November 17, 2021. Aside from the many duties of being a farmer’s wife, Susann spent much of her adult life working as a Librarian for Traverse City Area Public Schools, primarily at Long Lake Elementary. She found great joy in inspiring young readers and creating elaborately themed displays for students to enjoy. As Susann was raised primarily in the hotter climates, she certainly preferred the warmth of summer. When her boys were young, she enjoyed tending to the backyard pool area, including her beautiful flower gardens. During the frigid winter months, which Susann loathed, she’d be snuggled in her chair, reading, watching movies, or perusing popular television reruns; among her favorites were Colombo, Hunter, and Mash. Sewing was one of Susann’s many creative gifts. Her home adorned self-made window treatments and she enjoyed making beautiful skirts and dresses for her granddaughter. Much like Donald, Susann had a soft spot for animals. The two made quite a pair, going out of their way to save many critters throughout their life on the farm. Among the most unique was a longtime friend, Tweety Bird the barn pigeon, who she saved from an injury. Susann was a devoted member of Zion Baptist Church, where she attended multiple services each week. She especially looked forward to potluck Sundays with her church family. Susann is survived by sons, Robert (Cathleen) Bugai and Scott (Stephanie) Bugai; grandchildren, Gunner, Grace, Brody, and Baya; brother, Joseph (Elaine) Vask Jr. of Springfield Missouri; and her faithful dog, Roscoe. She is preceded in death by her beloved husband, Donald L. Bugai; parents, Joseph Sr. and Leona Vask. A celebration of life for both Susann and Donald Bugai is planned for May 21, 2022, at their home farm, in Cedar, Michigan. Condolences and memorial contributions can be directed to the family, in care of Robert or Scott Bugai, to be used in support of youth agricultural programs.

The family of Susann Bugai created this Life Tributes page to make it easy to share your memories.