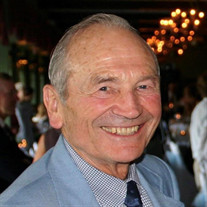 Dear Friends and Family: We will be hosting a celebration of Dad's life on Saturday, June 18th. It will be a time to share memories, swap stories, and, of course, savor a cookie or two in his honor. Date: June 18, 2022 Time:... View Obituary & Service Information

The family of Terence S. Malone created this Life Tributes page to make it easy to share your memories.

We will be hosting a celebration of...