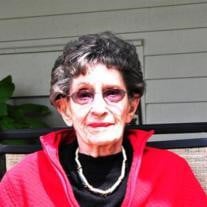 Thelma H. Simmons, 92, of Traverse City and formerly of Battle Creek, left this earth on the morning of September 18, 2012 from the home she shared with her family. A spectacular rainbow appeared and lifted us up, her reassurance of well being in the next world, as she had promised. Thelma had a unique and wonderful spirit. She was born near Reed City on May 17, 1920 to Rhoda (Brown) and Nathan Frederick (Happy) Luce. Her father in particular was a tender and loving inspiration to her during the difficult days of the depression. Tragically he perished in her late teens. She persevered as always and met and married her life partner, Philip Simmons on November 7, 1947. He left her too soon on April 19, 1973. Organized and industrious she worked as a bookkeeper in her hometown of Battle Creek and later as an elementary school secretary for 22 years. After the loss of her husband, her resilience propelled her into a career in real estate, owning and managing many rental homes. She moved to Traverse City in 1989. Irrepressible, she served as the transcriptionist in her son’s psychology practice into her 90’s. She helped care for her granddaughter, Lindsay Simmons, as a young child and continued to be an inspiration to Lindsay throughout her life. She was preceded in death by her parents, husband, and daughter, Yvonne Baldwin, her brother, Ernest Luce and sister-in-law Juanita Luce, and brother-in-law, William Ellerthorpe. She is survived by her son and daughter-in-law Wayne (Jennifer) Simmons, grandchildren, Lindsay and Andrew Simmons, Nicole Alejandro, Kristin Holm all of Traverse City and Katelyn (Sean) Leask of Kingsley, her great-grandchildren Jackson Alejandro and Conner and Natalie Holm of Traverse City, as well as son-in-law, Charles Baldwin of Cadillac, sister, Ilene Ellerthorpe and special nephew and niece Philip (Barbara) Luce all of Battle Creek and Bonnie Kelly of Portgage. She will be forever remembered by those who knew her as irrepressible, honest, and hilarious and most of all unendingly loyal to those she loved. Grandma enjoyed a special closeness with her grandson, Andrew, with whom she lived his entire life. Their love for one another was infectious, and they were often partners in playful crime. Near the end of her life she was cared for by her daughter-in-law, Jenny, their love for one another sustaining her. A celebration of her life will be held at a later date to be announced at her family home. Memorials may be directed to Central United Methodist Church Breakfast Outreach Program for the homeless and Grand Traverse YMCA building fund.

Thelma H. Simmons, 92, of Traverse City and formerly of Battle Creek, left this earth on the morning of September 18, 2012 from the home she shared with her family. A spectacular rainbow appeared and lifted us up, her reassurance of well being... View Obituary & Service Information

The family of Thelma H. Simmons created this Life Tributes page to make it easy to share your memories.

Thelma H. Simmons, 92, of Traverse City and formerly of Battle...