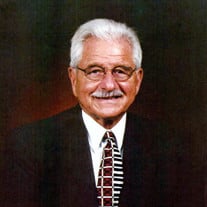 SPRINGFIELD — Theodore “Coach” John Swierad, 87 ,formerly of Glen Arbor, passed away peacefully at the Care Community Center of Springfield, where his wife now lives. Coach Swierad was born in Indian Orchard, Massachusetts, in 1927 on the 22nd of June. He graduated from Springfield Massachusetts Academy in 1943. Ted was a veteran of the United States Navy during the Korean War and in the United States Air Force where he served at the Empire radar base. He graduated from Central Michigan University with a Bachelor’s degree and began teaching at Glen Lake High School in 1970. Ted was a basketball coach there until his retirement in 1998. Ted loved sports of all types and especially loved basketball and reading. Ted is survived by the love of his life, Lois, in Springfield. They met at a basketball game Ted was playing in while he was stationed at the Air Force base in Empire. They were married at the Old Settlers Church in Burdickville, on October 27, 1951. Ted is lovingly remembered by his daughter, Christie Schlosser, of Kalamazoo; granddaughters, Rachel Schlosser and Katie (Christopher) Wetzel; and two great-granddaughters, Destiny Schlosser and Riley Wetzel. Theodore was preceded in death by his father, Andrew John; mother, Mary Doris; sons, Joel and Mark; a sister, Josephine Swierad, and son-in-law, Tom Schlosser. There will be a memorial service on July 15, 2015, at 7 p.m. at the Glen Lake Community Reformed Church in Burdickville. A private burial will be held for the family at a later date, at the Maple Grove Cemetery. In lieu of flowers donations are needed for the Care Community at 565 General Ave., Springfield, MI, 49037.

The family of Theodore "Coach" John Swierad created this Life Tributes page to make it easy to share your memories.