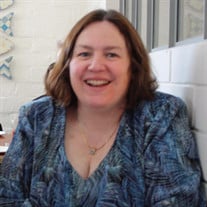 Theresa Anne Hitchens, 64, passed away June 9, 2021, at her home in Leland. Theresa was born August 16, 1956, in Grosse Pointe Farms, Michigan, the eldest child of Jessie and Dan Hitchens. She was a sports fan, playing tennis, softball, and field hockey, and swimming competitively in her youth, as well as a life-long fan of the Detroit Tigers (although in recent seasons, a very disappointed one). In 1969, Theresa and her family moved to Traverse City where she went on to graduate from St. Francis High School in 1974. In 1978, she graduated from Alma College with a degree in Business Administration. She was employed by her family for over 45 years, primarily as a bookkeeper. From 1998 to 2017, Theresa volunteered as the parish secretary and bookkeeper for St. Wenceslaus Parish in Gills Pier. She was very close with many church members, including Deacon Martin Korson, Phyllis Korson, Rosemary Moe-Kalchik, and Jackie Flores. Besides her father, Theresa is survived by her beloved daughters and their spouses, Barb McKay (Scott Gowell) and Anne (Brian) Clark; her precious granddaughters Charlotte, Nora, and Caroline Theresa; her siblings John (Janet) Hitchens and their children George (Glynis) Nemiroff and Rosie (Isaac) Wayton; Julie (Nick) Paron and their sons Kelly (Kennedy) Paron and Jamey Paron; Paul (Kwi) and their children Rosemary Hitchens, Danny Hitchens, and Barbie Lee; Eileen Larsen and her children Dana Larsen and Heather (Nolan) Fine; Tom (Cherie) Hitchens and their children Molly Hitchens, Sophie Hitchens, and Jack Hitchens. Additionally, Theresa is survived by her companion and friend of twenty years, Dan Schaub, and his mother, children, and siblings. Dan and Theresa spent many Sunday afternoons together driving her convertible throughout Leelanau County visiting friends and family. Theresa is also survived by her TC cousins Joanne Hitchens, Chuck Hitchens, Barb (Jim) Sullivan, and Patti (Don) Rutt, as well as long-time friends Lisa Sichler, Julie (Mike) Evans Rogers, Bobbie (Tom) Jamison, and her former husband and father of her two children, George McKay, as well as many other cousins, aunts, an uncle, and friends. Theresa was predeceased by her mother Jessie, her grandparents, and nephew Anthony Lee. The family would like to thank Dr. Peter Kohler, Dr. Jay Starr, and all the staff at the Cowell Family Cancer Center for the excellent care they gave Theresa during her cancer treatment. Visitation will be held on Tuesday, June 15, from 5-7 pm at Reynolds-Jonkhoff Funeral Home, 305 Sixth Street, Traverse City, with a Rosary at 7 pm. A Mass of Christian Burial will be held at 11 a.m. on Wednesday, June 16 at St. Wenceslaus Church, with family greeting friends at 10 a.m. A private family burial, in the St. Wenceslaus cemetery, will take place later. In lieu of flowers, memorials to help support the maintenance of the historic church and grounds, as well as Mass Intentions, may be directed to St. Wenceslaus Parish, 8500 E. Kolarik Road, Suttons Bay, MI, 49682 or to the Cancer Program Needs Fund at the Cowell Family Cancer Center, 217 S. Madison Street, Traverse City, MI, 49684.

Theresa Anne Hitchens, 64, passed away June 9, 2021, at her home in Leland. Theresa was born August 16, 1956, in Grosse Pointe Farms, Michigan, the eldest child of Jessie and Dan Hitchens. She was a sports fan, playing tennis, softball, and... View Obituary & Service Information

The family of Theresa Anne Hitchens created this Life Tributes page to make it easy to share your memories.