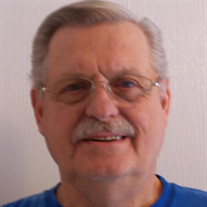 Thermond Barry was a fantastic 82 year old soul! He passed away unexpectedly on May 30, 2021 at his Lake Leelanau home. The love of his life was by his side. Thermond was born into this world on October 14, 1938 to the late Herman and Carrie (Ackerman) Barry. He was the first of six children. After graduating from Muskegon High School, Thermond admirably volunteered to serve in the United States Naval Forces. He honorably served our country from 1956 to 1959 and then went on to attend the prestigious Culinary Arts School in New York. Thermond was an executive chef for many years in several fine establishments including The Ramada Inn and The Honey Creek Inn in Cannonsburg, MI. Prior to full retirement, Thermond shared his smile at work, and his skills shined in the meat department at Hansen Foods in Suttons Bay. Being invited to dinner with Chef Thermond at the helm was a special treat, and his recipes were sought after. Thermond married Lloeta Mae Thompson on a picture perfect, warm and sunny day on Big Crooked Lake in 1999. There was a flotilla ceremony offshore, with freshly bloomed flowers and love aplenty. Thermond was the most loving and supportive husband to his bride Lloeta, and it was reciprocated. Those who know them and have seen them together, have seen true love. Their energy was amazing and contagious. In his spare moments, Thermond loved to fish, and be on or near the water. He was a successful fisherman and made room for his grandchildren on his boat too! He and Lloeta also enjoyed annual vacations on Florida’s gulf with their friends Ron and Judi Finger. Offshore fishing was more than a hobby on those trips. These were memories in the making that will be deeply treasured. Thermond is survived by his wife Lloeta; brother Andrew Barry; step-brother Dan (Jeannie) Wimmer; step-brother Chuck (Carolyn) Wimmer; step son Doug Dubay; step grandsons Dustin Boyer, Reese Dubay and Clayton Dubay; step great granddaughter Camille Dubay; brothers-in-law John Thompson and Bob (Virginia) Thompson; many nieces and nephews, and dear friends Julie Dubay (who will always be like a daughter to the family), Ron and Judi Finger, Dennis and Nancy Buck, Char Lastacy and Don Kurlowicz; Thermond was preceded in death by his parents; brother Carl Barry; sister Laura Staples; and stepson Don Dubay. Thermond Barry was amazingly good hearted and fun. Throughout multiple physical challenges, Thermond maintained a positive attitude. He was a father figure to many and “Grandpa Thermond” to many more. His kindness was steadfast and he will be dearly missed. Although we will remember and celebrate Thermond in many ways, many times over, there will be a memorial service later this summer, at a date yet to be determined. Thermond’s ashes will soon be permanently docked in the safe harbor of Lake Ann Cemetery. Fish on Therm! To honor Thermond’s memory, contributions may be directed to the Leelanau County Sheriff's department for their marine patrol division.

Thermond Barry was a fantastic 82 year old soul! He passed away unexpectedly on May 30, 2021 at his Lake Leelanau home. The love of his life was by his side. Thermond was born into this world on October 14, 1938 to the late Herman and Carrie... View Obituary & Service Information

The family of Thermond LeRoy Barry created this Life Tributes page to make it easy to share your memories.

Thermond Barry was a fantastic 82 year old soul! He passed away...