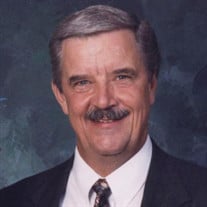 KALKASKA - Thomas “Tom” Peter Brouwer, 80, passed away June 14, 2021 at home in Kalkaska while surrounded by family following a lengthy illness. Tom loved the Lord, his family and the game of golf. No one was a stranger to Tom. He was extremely social, loved people and had a way of making everyone he met feel like family. He was a good dude. Tom was born December 4, 1940, grew up in the Grand Rapids area and was a lifelong Michigan resident. He was proud of his Dutch heritage and often joked, “If you’re not Dutch, you’re not much.” Tom developed his lifelong love for golf as a caddie when he was a young man. He loved everything about the game, played it as often as he could and watched all things golf on television. He played often in Northern Michigan, central Florida and around the country while traveling for work. He even made a hole in one. Tom enlisted in the Navy even before graduating from Union High School in Grand Rapids. He was on the USS Yellowstone during the Bay of Pigs invasion in 1961 and also spent time in the Mediterranean. Tom spent most of his career as an accountant or administrator for the county road commission, including 20 years as the administrator of the Michigan County Road Commission Self-Insurance Pool, which he helped develop. He retired in 2006 and after that enjoyed winters in Florida, which allowed him to golf year-round. Tom grew up in the church and never left. He spent time as an elder and as the youth group leader at the Kalkaska Church of Christ and took on every task or role that was asked of him throughout his life in the church. He attended services weekly and loved Christian gospel music and hymns. Tom is survived by his wife of 24 years, Janette Brouwer, who described him “drop-dead handsome” and “honest to a fault.” An example: Once while watching a fifth-grade girls basketball game, Tom yelled from the stands, imploring the team he was rooting for to “Watch No. 9, she’s the only one who knows how to play.” Tom himself said that the reason he was asked to be the “voice of the Kalkaska Blazers” – the public-address announcer at local high school games – was because he yelled so much from the sidelines. Tom is also survived by his children, Bryan (Jennifer) Brouwer, Brett (Dawna) Brouwer and Kimberly Glerum; his stepchildren, Troy Strahan, Trisha Strahan and Amanda (Chris) Iott; siblings Kenneth (Jane) Brouwer, Kathie (John) Rowley and Carol (Jay) Piper; 16 grandchildren and step-grandchildren; three great grandchildren; and his beloved dog, Daisy Mae. He was preceded in death by his parents, George and Catherine; and his brother Harvey Nies. Visitation will be held at 10 a.m. Friday, June 25 at the Kalkaska Church of Christ, followed by a memorial service at 11 a.m. and lunch immediately following the service. In lieu of flowers donations can be made to Hospice of Michigan, 10850 E Traverse Hwy, STE 1155, Traverse City, MI 49684. Please share a memory with Tom’s family by visiting his tribute page at www.reynolds-jonkhoff.com. The Reynolds-Jonkhoff Funeral Home and Cremation Services is serving the family.

KALKASKA - Thomas &#8220;Tom&#8221; Peter Brouwer, 80, passed away June 14, 2021 at home in Kalkaska while surrounded by family following a lengthy illness. Tom loved the Lord, his family and the game of golf. No one was a stranger to Tom. He... View Obituary & Service Information

The family of Thomas Peter Brouwer created this Life Tributes page to make it easy to share your memories.