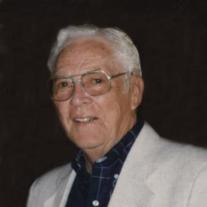 Thomas James "Jim" Conlon Died-June 11, 2012 Traverse City-Thomas James "Jim" Conlon, 90, a long time resident of Traverse City, died Monday evening, June 11, 2012, at Grand Traverse Pavilions. Born December 17, 1921, in Detroit, he was the son of the late Edward F. and Frances Irene (Byrnes) Conlon Jim faithfully served his country with the United States Marine Corps during WWII. Following the bombing of Pearl Harbor he enlisted in the Marines. He took part in the invasion of Guadalcanal, Tarawa and Talugi. Jim also spent time in New Zealand, where he recovered from malaria. He was later honorably discharged. He worked as a Industrial Supply Sales Representative and owned and operated T. J. Conlon and Company, based out of Traverse City. For many years he was a member of the Wanderers, a group of old friends who liked to have a good time. He was also a life member of the Traverse City Elks Lodge. Jim enjoyed deep sea fishing, and was an avid golfer who achieved a hole in one. In addition to his wife, Pat, he is also survived by his children, Cynthia "Cinder" Conlon, of Traverse City and Michael Conlon, of Rochester Hills; sister in law, Constance "Connie" Conlon, of Farmington Hills; along with Pat's family the Curtis children and grandchildren, and extended family members. A Mass of Christian Burial will take place at St. Francis Catholic Church on Friday, June 15, 2012, at 10:30 A.M. Rev. Kenneth Stachnik will preside. He was preceded in death by his brother, Edward Conlon, and his first wife, Virginia "Jane" Conlon. Cremation has taken place. In remembrance of Jim, memorials may be directed to Old Town Playhouse, 148 E. 8th Street, Traverse City, MI 49684, St. Francis Catholic Church Food Pantry, 1025 S. Union Street, Traverse City, MI 49684 or to the Jubilee House, 325 Washington Street, Traverse City, MI 49684. Envelopes may also be obtained at the church. The Conlon family would like to thank all ofthe workers at the Pavilions, especially in Elm, Aspen, and the Cafe for their never-ending kindness. Jim was cared for with smiles and patience. Thank You all. Kindly share your memories with the family on their online guestbook at www.reynolds-jonkhoff.com Arrangements were made with the Reynolds-Jonkhoff Funeral Home and Cremation Services.

The family of Thomas James "Jim" Conlon created this Life Tributes page to make it easy to share your memories.