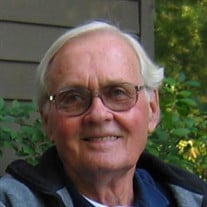 THOMAS KENYON (TK) DAVIS, died peacefully at his home on January 14, 2021. Born March 5, 1925, son of Elwood E. Davis and Ruth F. Davis, he is preceded in death by his wife of 60 years - Phyllis (Condit), his parents, brother James and sister Martha. He is survived by three sons, Tim (Dianna) of Cincinnati, Bill (Valerie) of Clarkston, MI, and Sam (Jill) of Dayton; grandchildren Christopher (Katharine), Katherine (Talbot Caywood), Harrison (Kelly), Weston, and Bennett; and great grandsons Kenyon, Teddy, Leighton, and Moxley. Tom graduated from Mt. Gilead (OH) High School in 1943 and went on to serve as an Army corporal and ambulance driver in Europe during WWII. Returning home, he attended Denison University, pledged Beta Theta Pi, set records as a two-miler on the track team, met Phyllis and graduated in 1950, citing these as some of the best years of his life. He and Phyllis married in 1950 and settled in Dayton. Tom began his career in business with Condit Construction Products, where he would work until retirement. He was a dedicated member of St. Paul’s Episcopal Church in Dayton, where he sang in the choir and worked with the youth group. After moving to Glen Lake, MI, he and Phyllis joined St. Philip’s Episcopal Church in Beulah and were regulars at The Dunes Golf Course, where Tom worked many years as a starter. Tom lived a full life, making many close friends along the way. He enjoyed being outdoors most, always eager for family camping trips, hiking, and playing golf. He loved good jokes, opera, martinis, Mel Brooks movies, Skyline Chili, and all the dogs in his life. Mostly, he loved Phyllis and the family. His kindness, easy smile, willing hand, and love of simple joys will remain in the hearts of all who knew him. Plans for a memorial service at St. Philip’s Episcopal Church are pending. In lieu of flowers, donations are encouraged for Episcopal Relief and Development (www.er-d.org) or Heifer International (www.heifer.org). Please visit www.reynolds-jonkhoff.com to share your thoughts and memories with the family as well as updates on upcoming services.

The family of Thomas Kenyon "TK" Davis created this Life Tributes page to make it easy to share your memories.