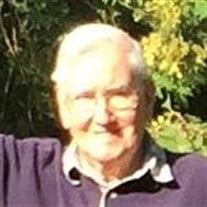 Thomas Fredric Evans, 87, passed away Saturday, February 15 at his residence in Traverse City. He was born in Indianapolis to William and Lois Hathaway Evans and had four older siblings. After graduating from Shortridge High School, he enrolled at Princeton University where he was a member of the Tower Club and a coxswain for the Crew, graduating as a history major in 1955. After Princeton he served with Army Counterintelligence. During that time, he met the love of his life, Jane Parsons, in Chicago and they married in April 1957. His love for Leland began then. He was an investment banker in Indianapolis and later at Princeton Bank and Trust where Jane and Tom moved to raise their family in 1969. They spent summers in Leland until retiring there in 1998. Tom became immersed in Leland life, going to Coffee with the gents, enjoying 4th of July parades and making his yard colorful for birds and butterflies. He also proudly served as a County Commissioner and a board member for ShareCare. He and Jane moved to Cordia in May 2018. Jane passed away unexpectedly in July 2018, leaving a huge void in his life. He grew to enjoy his friends and activities at Cordia as well as his 'vacations' back to Leland with his girls and their families. He is survived by Julie Rogers (Mike), Amy Rullo (Tom) and his three grandchildren whom he cherished: Malcolm Rogers, Joshua Rogers, and Jessica Rullo. The family would like to acknowledge with thanks, gratitude, and appreciation, the wonderful people who surrounded him these past months with love, support, and care; especially his 'family' at Cordia. All are welcome to celebrate his life at 11AM this Saturday, February 22, at the Leland Community United Methodist Church, with calling at 10AM. In lieu of flowers, contributions can be made in his name to the Leland Library, ShareCare, or The Fishtown Preservation Society. The family is being cared for by the Reynolds Jonkhoff Funeral Home and Cremation Services.

Thomas Fredric Evans, 87, passed away Saturday, February 15 at his residence in Traverse City. He was born in Indianapolis to William and Lois Hathaway Evans and had four older siblings. After graduating from Shortridge High School, he enrolled... View Obituary & Service Information

The family of Thomas Evans created this Life Tributes page to make it easy to share your memories.