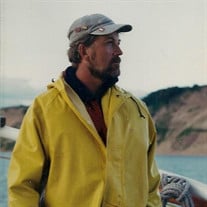 Thomas M. Kelly, 67, of Suttons Bay passed away at home surrounded by his family on January 8, 2016 of Mantle Cell Lymphoma. He was known as Captain Tom to thousands of students throughout Michigan. To colleagues, parents and educators he was known as a visionary. That vision was to teach children and adults to know and love the Great Lakes and to use that knowledge and passion to protect the lakes. Inland Seas, the schoolship he conceived and captained for 20 years, with its distinctive green hull and dark red sails, could frequently be seen on Grand Traverse Bay. Tom was born in 1948 in Santa Monica, California. His father was a Colonel in the U.S. Air Force and the family moved frequently throughout the US and UK. Tom’s favorite memories were from the years he lived in England, where he would spend afternoons at the Chorleywood train station meticulously recording the engines that came through. Only a few months ago, Tom realized a life-long dream to drive a steam train on a trip along the Connecticut River. Tom’s love of sailboats began at age 14 when his family moved to Michigan and his father bought a 16-foot gaff-rigged catboat to sail on White Lake. Tom never lost his love of the water. He earned a Bachelor of Science degree in resource management and a Masters degree in fisheries biology from the University of Michigan. He operated his own charter sailing business, worked on a U of M research vessel, served as a marine consultant and authored numerous papers on aquatic research. He held a U.S. Coast Guard Masters license for 10-ton sail and power vessels. Tom’s dream of a schoolship began in 1988 when a friend a suggested he crew on the Clearwater, the Hudson River sloop and environmental schoolship founded by folksinger Pete Seeger. Upon returning to the Great Lakes in 1989, Tom founded Inland Seas Education Association (ISEA) with partners John Elder and Peter Doren. In 1989, he and his team began taking students on educational trips aboard the Malabar, Manitou, and his own 35’ wooden ketch, Cygnet. In 1990 Tom was featured in a National Geographic Special, “Great Lakes – Fragile Seas.” By 1994 the schooner Inland Seas was built and ready to set sail. The program attracted students from throughout Michigan and Tom also led groups from as far away as Japan, Germany and Indonesia. In 2001 ISEA purchased property from Northern Lumber Company in Suttons Bay and built the Inland Seas Education Center. The building, which includes a museum, classrooms, laboratories and a boat shop, furthered Tom’s mission of inspiring children and adults about the wonders of the Great Lakes. Tom told a reporter once, “I grew up more interested in making a difference than making a buck,” and he did. Tom leaves a legacy of students young and old inspired by his passion to love and protect the Great Lakes. Shortly after Tom retired in 2013, Inland Seas carried its 100,000th student aboard. In August 2014 Traverse magazine, featured Tom, calling him, “The man who brought schoolships to the Great Lakes.” Tom married Anne Weber in 1988. She shared his love of sailing and became his “first mate,” frequently joining him aboard Inland Seas and Cygnet. Their daughter Emma was born in 1992 and their son Graham was born in 1995. Both children share their father’s passion for the environment. Tom is survived by his wife Anne, his children, Emma and Graham, and his sisters Susan Kelly and Kathleen O’Neill. He is also survived by his in-laws, Lois Jelneck, Robert O’Neill and Christine Weber, and by his nieces and nephews, Nancy Keel, Ellen Yale, Robin Barclay, Timothy O’Neill, Michael O’Neill and David Weber. A memorial service will be held on Jan. 16 at 10 a.m., at Grace Episcopal Church, 341 Washington St., Traverse City. A "Celebration of Life" will be held from noon to 3 p.m. at the Inland Seas Education Center located at 100 Dame Street Suttons Bay, MI. Memorial contributions may be made to ISEA’s “Tom Kelly Scholarship Fund” or the “Tom Kelly Schoolship Upkeep Fund” at Inland Seas Education Association, PO Box 218, Suttons Bay, MI 49682; http://schoolship.org; or to ShareCare of Leelanau, Inc., 7401 East Duck Lake Road, Suite 600, Lake Leelanau, MI 49653. The family is being cared for by the Reynolds-Jonkhoff Funeral Home and Cremation Services.

Thomas M. Kelly, 67, of Suttons Bay passed away at home surrounded by his family on January 8, 2016 of Mantle Cell Lymphoma. He was known as Captain Tom to thousands of students throughout Michigan. To colleagues, parents and educators he... View Obituary & Service Information

The family of Thomas Michael Kelly created this Life Tributes page to make it easy to share your memories.