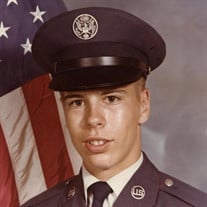 Thomas M. Piche, 60, of Traverse City, Michigan passed away peacefully on Wednesday, February 17, 2021at Medilodge of Grand Traverse County. Tom was born on October 5, 1960 in Detroit, Michigan to Robert and Joanna (Milos) Piche. Tom was a 1978 graduate of Kimball High School in Royal Oak, Michigan. After graduation Tom enlisted and proudly served his country in the U.S. Airforce. Upon his return home, Tom became employed with the U.S. Postal Service in Detroit. Then later, with Sprague Prutsman Inc., in the shipping and receiving department. Eventually Tom moved to Traverse City, where he was employed with Leer Corporation as a material handler. In his spare time Tom loved to be on the golf course or on the water fishing. Above all, his greatest joy, was spending time with his siblings and their families as well as attending extended Piche family gatherings. Tom is survived by his father, Robert (Nancy) Piche, two brothers and two sisters; Michael (Lisa) Piche, Kevin Piche, Michele (Robert) Tekip and Theresa (Robert) Ditmar. Also surviving are many nieces and nephews. He was preceded in death by his mother, Joanna Piche and a brother, Kenneth Piche. In accordance with Tom’s wishes cremation has taken place. A private family service will be held at a later date. Tom’s family would like to extend a heartfelt thank you, to the nursing and support staffs of Medilodge of Grand Traverse County. Their loving and personal care of Tom during his stay will never be forgotten. Those planning an expression of sympathy may wish to consider a memorial donation to The Little Sisters of the Poor, 1503 Michael’s Road, Henrico, VA 23229. Please feel free to share your thoughts and memories with Tom’s family at his tribute page at www.reynolds-jonkhoff.com. The family is being cared for by the Reynolds-Jonkhoff Funeral Home and Cremation Services.

Thomas M. Piche, 60, of Traverse City, Michigan passed away peacefully on Wednesday, February 17, 2021at Medilodge of Grand Traverse County. Tom was born on October 5, 1960 in Detroit, Michigan to Robert and Joanna (Milos) Piche. Tom was a 1978... View Obituary & Service Information

The family of Thomas M. Piche created this Life Tributes page to make it easy to share your memories.