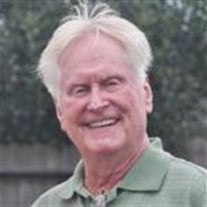 TRAVERSE CITY - Thomas “Tommy” Lee Carter, 79, of Traverse City and resident of Davie, Florida, lost his battle with life on May 24, 2016. He was born on November 1, 1936 in Hutchinson, Kansas to the late Jack R. and Geraldine W. (Piersall) Carter. Tommy enlisted and proudly served his country in Korea as a Sargent in the U.S. Marine Corps. He attended junior college in Kansas, and the Hollywood School of Drama in Los Angeles and envisioned a life of glamour in the TV and movie industry. It was not to be but he appeared in some TV shows and then decided he would rather be a family man and a golfer. He was an excellent golfer for many years. In 1966 he settled in Fort Lauderdale and in 1974 he married Vicky Gore who was his soulmate for 42 years. They raised their combined families and had a wonderful life with lots of good friends. He was also proud of his Irish heritage and loved showing off to his many friends. Loved by so many, Tommy was the life of the party and was always ready with a joke or a good story. He was a member of the Fort Lauderdale Country Club since 1980 and they considered it as their second home. Tommy is survived by his wife Vicky, daughter Valerie Carter Gunnigle of Huston, TX; son, Timothy Hilton of Summerville, SC.; Pa Pa Tommy to 5 grandchildren, Stephanie Hilton, of Lexington, Ky Sloan and Suzannah Hilton, of Summerville, SC., and Grand Pa to Carter and Kelly Gunnigle, of Houston, TX.; step-father to Tonya Cannon of Woodstock, GA. and step-grandfather to Sarah Caitlin; brother, John “JC” (Susie) Carter, of Cape Canaveral, FL.; sister, Jeri Anne Carter, of Deland, FL. He will be mourned and missed by his family and his many friends. A celebration of his life will be held at a later date and the information will be updated on the Reynolds-Jonkhoff website at www.reynolds-jonkhoff.com. Contributions in his memory can be made to St. Jude or to Make-A-Wish or to Friends For Life, P.O. Box 340, Sapphire, NC. 28774. Kindly share your thoughts and memories with Tommy’s family by visiting his online guestbook at www.reynolds-jonkhoff.com.

The family of Thomas "Tommy" Lee Carter created this Life Tributes page to make it easy to share your memories.