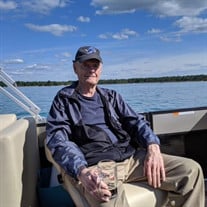 TRAVERSE CITY – Thomas (Tom) Edward White, 87, passed away on Thursday, December 10, 2020 in Traverse City, Michigan. Thomas was born on January 27, 1933 to Paul and Mildred (Cease) White in Detroit, Michigan. The oldest of three children, he graduated from Detroit Jesuit High School in 1951. Thomas served in the army during the Korean War and continued in the Army reserves where he attained the rank of Captain. Thomas enjoyed 58 years of marriage with the late Ann Susan (Liedel), whom he wed in 1957. They lived together in Traverse City where they raised seven children. Thomas worked for Wyeth Laboratories as a Sales Representative for the northern, lower Michigan territory prior to retiring to Elk Rapids, MI. Thomas enjoyed volunteering for the Grand Traverse Area Catholic schools for 30 years as the announcer during St. Francis High School football and basketball games. His love for sports carried into a love for University of Notre Dame football. Thomas also enjoyed camping in his beloved camper van, boating and hosting family and friends at his bayside home. Thomas also enjoyed wintering with his wife Ann in Palm City, Florida. Thomas was preceded in death by his loving wife in 2016 and is survived by his two daughters, Susan (Steve) Crumb, and Julia Messingslager, and his five sons; David (Amy) White, Maple City, MI, Daniel (Rhonda) White, Traverse City, MI, Peter (Carrie) White, Sarasota, FL, Ronald (Devon) White, Stuart, FL, James White, Grand Rapids, MI and by 19 grandchildren and 2 great-grandchildren with 2 more great-grandchildren expected in the Spring 2021. There will be a private family graveside service for Thomas where he will be laid to rest at Sacred Heart cemetery in Elk Rapids. A funeral mass will be held in the Spring 2021 at Christ the King Church in Acme. Service details will be announced at a later date. Memorial contributions in Tom’s remembrance may be directed to Grand Traverse Area Catholic Schools, 123 E. Eleventh Street, Traverse City, MI 49684.

The family of Thomas Edward White created this Life Tributes page to make it easy to share your memories.