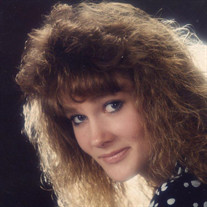 Tishana “Shana” Renae Blanchard, 47, of Traverse City passed away in the early morning hours on November 20, 2021 at Munson Medical Center due to covid-19. She was born on July 29, 1974 to Sam Enos and Leslie Maxine Decator. She was one of two girls. Shana went to Evart Public Schools and graduated in 1992. She joined the Army after graduating and remained enlisted until an injury had her honorable discharged. She went on to attend a semester at Ferris State University, before committing to starting a family. She worked various in-home health jobs throughout her life, but her all time favorite job was working in the tasting room at Black Star Farms. Shana loved being out in the sun, whether on a boat, jet skiing or laying on the beach. It was very important to her to stay tan, even during the winter months. She battling many struggles in life in the past decade but managed to hold her head up and persevere. Shana loved the holidays, knowing that the family would all be together. She would always do whatever was needed to make the holidays special. One Christmas she got her daughter a hamster encouraging both her children to experience the care and responsibility and the love that goes into such a pet. Not only was Shana always with a hamster, but a cat too. She enjoyed cooking very much and had staple recipes that her children still make today. Her father had motorcycles for a majority of her life and she loved to be taken on rides. A favorite pastime that both her children enjoy today. She is survived and missed dearly by her children Austin Robert Blanchard (Sarah Anne Fenton) of Honor, MI and Megan Renae Blanchard (Anthony Donald Cornejo) also of Honor, her parents, sister Tanya Nicole Decator of Iowa, aunt Brenda (Tom) Ficeli of Howard City, MI, grandparents Elden and Lahoma Head of Evart, MI and pets Sissy the cat and Gus-Gus the hamster. She is preceded in death by grandparents Joseph and Arlene Decator, her aunt Mildred Decator, as well as great grandparents and great aunt and uncle. A private memorial service will take place on Mother’s Day of 2022 in Evart, MI. Please contact Megan for details. Shana and her family are being cared for by the Reynolds Jonkhoff Funeral Home and Cremation Services.

The family of Tishana "Shana" Blanchard created this Life Tributes page to make it easy to share your memories.