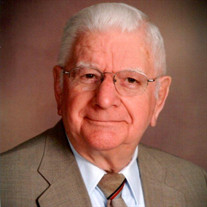 Valere “Val” J. Lamie, Jr., 93, of Traverse City, passed away peacefully on Sunday, February 27, 2022 at his home. Val was born on June 30, 1928 in Lake Leelanau to the late Valere and Florence (St. John) Lamie. He married the love of his life Arlene Perrault on April 28, 1951 at St. Mary Catholic Church in Lake Leelanau. She preceded him in death on December 8, 2010. Val had been employed as a machinist for Cone Drive, retiring in 1990 after over 29 years of service. He honorably served in the U.S. Coast Guard for seven years. Val was a member of Immaculate Conception Catholic Church. He served as an usher and on the funeral luncheon committee. Val was also a member of the Knights of Columbus, IC men’s club and the UAW retirees. In his spare time, Val could be found tinkering in his garage. He loved working on small engines and could fix anything. Above all, spending time with his family was his greatest joy. Val is survived by his two daughters; Virginia (Stephen) Plamondon and Nora (James) Beckett and two sisters; Eunice Novak and Beverly Schaub. Also surviving are six grandchildren; Andrea (Bob) Trowbridge, Mark Lamie, Regina (Michael Gretzmacher) Plamondon, Louis (Amy) Plamondon, Annette (Josh) Send and Grace (Ryan) Hannon as well as 15 great-grandchildren. He was preceded in death by a son, Calvin Lamie, a daughter, Gloria Lamie, two brothers and a sister; Merten Lamie, Edgar Lamie and Betty Fleis. Friends are welcome to visit with Val’s family from 4:00 to 6:00 p.m. on Monday, March 7, 2022 at the Reynolds-Jonkhoff Funeral Home, 305 Sixth St., Traverse City, Michigan 49684. The rosary will be prayed at 6:00 p.m. Mass of Christian Burial will take place at 11:00 a.m., with visitation starting at 10:00 a.m., on Tuesday, March 8, 2022 at Immaculate Conception Catholic Church, 308 Cedar St., Traverse City, Michigan 49684. Rev. Fr. Anthony Citro will officiate. Virtual Public webcasting will take place at https://immaculatetc.org/. Those planning an expression of sympathy may wish to consider a memorial donation to Immaculate Conception Catholic Church, Immaculate Conception Catholic School or the church’s food pantry. Please feel free to share your thoughts and memories with Val’s family at his tribute page at www.reynolds-jonkhoff.com. The family is being cared for by the Reynolds-Jonkhoff Funeral Home and Cremation Services.

The family of Valere "Val" J. Lamie Jr. created this Life Tributes page to make it easy to share your memories.