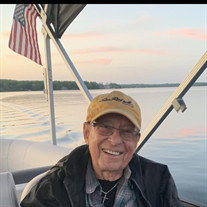 Valmor John Gauthier “John” passed away January 26th 2021 surrounded by his loving wife of 66 years and his children. He was born June 22, 1932 to Edmond and Agnes Gauthier. He was a loving Husband, Father, Grandfather, Great Grandfather, brother and friend to many. John was a proud veteran and served the country he loved. If you asked his national origin, he would say “I am an American”. After serving his country, he found his way back to Lake Leelanau at the snack stand there to court his future wife Ruth Schaub. They had five children while running a successful business, Gauthier Shoes, for over 60 years. The store was never open on Sunday as that was a day of worship and family. For over 40 years you could see him and his wife driving down Lake Leelanau in their beloved yellow Sea Ray “Delta Dawn” grinning ear to ear with the American flag flying out the back. The boat never left the dock without his wife or the flag. John and Ruth were avid polka dancers and loved to play cards with family and friends. They spent the past 30 years wintering in sunny Florida and boating down there; but he always said “Leelanau County is home”. He greatly enjoyed his garden, pickling vegetables and making hooch. If you visited, you would often leave with a special care package of vegetables and of course a shot of hooch. You had to pick your favorite flavor so of course that meant trying more than one. It’s no wonder their house is always bustling with family and friends. One of this favorite past times was being at the 90 acres he and Ruth own in Leelanau county, entertaining family and friends around the campfire with his harmonica and telling a good joke. He also enjoyed the camaraderie of annual deer camp. It was a place of great peace and enjoyment for him. His wife and children will ensure that legacy lives on. John leaves behind his amazing wife Ruth, their four children Debbie (David) Enger, Tina Martin, Kevin, Dawn (Chris) Lund, 10 grandchildren and 7 great grandchildren and his “baby brother” James (Phyllis) Gauthier. He was preceded in death by his parents, his brothers Melvin, Linus, Dean, and sister Emily. Together, John and Ruth navigated the loss of their son Scott. A service honoring John’s life will be held Friday, February 5th at St. Philip Neri Church, 11411 S. Lacore Rd, Empire MI. Visitation will begin at 10:00 AM with mass at 11:00. A military burial will immediately follow at Grand Traverse Memorial Gardens 3575 Veterans Dr, Traverse City, MI. In lieu of flowers, contributions may be directed to a local veteran organization. Those who wish to share memories or condolences may visit his tribute page at www.reynolds-jonkhoff.com

Valmor John Gauthier &#8220;John&#8221; passed away January 26th 2021 surrounded by his loving wife of 66 years and his children. He was born June 22, 1932 to Edmond and Agnes Gauthier. He was a loving Husband, Father, Grandfather, Great Grandfather,... View Obituary & Service Information

The family of Valmor "John" Gauthier created this Life Tributes page to make it easy to share your memories.