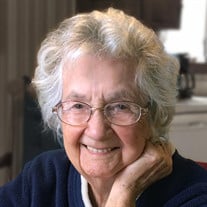 Vera E. Byrd, 95 of Traverse City passed away May 24, 2018. Vera was born in 1922 to the late Joseph and Viola Charron in River Rouge. Vera was one of eight children and chose to leave school after 9th grade to take on a job to help her family. Her tenacious spirit was evident from an early age. On Valentine's Day in 1942, she met her soulmate at a dance, Anthony Byrd, and they married in September. In 1946 Vera and Tony started Byrd Hardware which later became Byrd Marine in the mid 1950s. It was the largest boat dealer in Dearborn, and soon thereafter was one of the first dealers of Ski-Doo snowmobiles for winter business. She was a savvy business woman. After forty years, they retired and moved to the Traverse City area. In her spare time, Vera was a dedicated volunteer for Oakwood Hospital’s Heart Unit, served as an usher at the Fischer Theatre, Fox Theatre and Vest Pocket Theatre, and in later years volunteered at the Acme Christian Thrift Store. Vera enjoyed traveling both in the U.S. and abroad to Mediterranean countries, South America including the Galapagos Islands. Vera enjoyed reading, singing, dancing, crossword puzzles, cryptograms and was a dedicated fan of the Detroit Red Wings. She loved spending time at the family cabin filled with wonderful memories. She also enjoyed a good glass of gewürztraminer wine. Above all else, Vera cherished her family. She had a wonderful sense of humor, a quick wit and a great smile. Her feisty spirit and love will be deeply missed. She gave her family many special memories to carry in their hearts. Vera is survived by her children Diane Byrd, Ronald Byrd, Tony (Shirley) Byrd Jr., Christina (Steve Burrows) Byrd and Suzanne (Paul) Conant; grandchildren Jon Byrd, Daniel (Elizabeth) Byrd, and Heather Prudhomme; and great-grandchildren Adrian Ciuguden, Hailey Prudhomme, Erik Byrd, Olivia Byrd and Brooke Byrd. Vera was preceded in death by her husband Anthony and her son Daniel. The family will be celebrating Vera's life privately. Memorial contributions may be directed to Hospice of Michigan-Traverse City, 10850 E. Traverse Hwy. #1155, Traverse City, MI 49684 Please visit www.reynolds-jonkhoff.com to share your memories with the family. The family is being cared for by Reynolds Jonkhoff Funeral Home and Cremation Services.

Vera E. Byrd, 95 of Traverse City passed away May 24, 2018. Vera was born in 1922 to the late Joseph and Viola Charron in River Rouge. Vera was one of eight children and chose to leave school after 9th grade to take on a job to help her... View Obituary & Service Information

The family of Vera E. Byrd created this Life Tributes page to make it easy to share your memories.