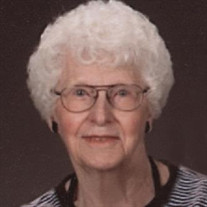 Traverse City – Verla Kay Jamieson, 86, of Traverse City passed away April 13, 2017 at Munson Hospice House surrounded by her family. Verla was born on March 31, 1931 in Carson City to the late Charlie and Thelma (Brown) Miller. She graduated from Carson City High School. In 1953, Verla graduated from the E.W. Sparrow Hospital School of Nursing in Lansing and during the final year of her study at Sparrow, she met her future husband, Calvin John Jamieson, a resident of the Old Mission Peninsula. Calvin and Verla were united in Marriage by Verla’s grandfather, the Reverend Roy Miller on July 4, 1953 in Carson City. Verla was a nurse in Kentucky while Cal was in the Army and later spent six years as a nurse at Munson Medical Center. Verla will be remembered as a strong lady with a wonderful sense of humor. She loved basketball very much, and continued to coach from the sideline every game she watched in person or on TV. In high school her tenacity resulted in the first woman’s basketball team in Carson City, which she played on. She was a good athlete, and was also a cheerleader for the men’s basketball and football teams. She was proud of the fact that that she could even out run the boys. Verla loved her church and church family very much. She was very involved in her community. She helped run the family cherry orchard, was a member of the Old Mission Women’s Group and worked for Old Mission School in the Cafeteria and the playground. Verla was passionate about education and was a past president of the Old Mission Peninsula School Board. She was an advocate of conservation, and worked hard with the Land Conservancy to make sure the Old Mission Peninsula would have land that remained undeveloped, for future generations to enjoy. She also hosted a live agricultural TV show at the urging of Sen. George Mcmanus, which her kids loved to watch. Verla is survived by her husband Calvin; daughters Kelli (Glenn Christian) Larson, Karla Jamieson, Krista (Gerald) Becker, and Jamie (Brian) Jamieson-Burkholder; sister Vonna Montague; grandchildren Ryan Fouch, Ronald Becker, Tiffany Hodgson and Sarah Larson; great grandchildren Kylie Fouch, Alaska and Indigo Hodgson. Verla was preceded in death by her parents Charlie and Thelma (Brown) Miller; sons Kim Charles and Calvin John II. Please join the family for visitation on Tuesday, April 25, 2017 from 5 – 8 p.m. at the Reynolds-Jonkhoff Funeral Home. The funeral service celebrating her life will be held on Wednesday, April 26, 2017 at 11:00 a.m. at the Old Mission Peninsula United Methodist Church. Those wishing an expression of sympathy may direct contributions to the Old Mission Peninsula United Methodist Church, 16426 Center Road, Traverse City, MI 49686.

Traverse City &#8211; Verla Kay Jamieson, 86, of Traverse City passed away April 13, 2017 at Munson Hospice House surrounded by her family. Verla was born on March 31, 1931 in Carson City to the late Charlie and Thelma (Brown) Miller. She... View Obituary & Service Information

The family of Verla Kay Jamieson created this Life Tributes page to make it easy to share your memories.