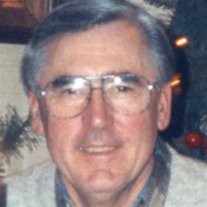 Dr. Vernon “Vern” Lee Oxender, 78 of Williamsburg, died Tuesday, May 28 2013 at his home surrounded by his loving family. Vern was born on July 29, 1934 in Constantine, MI to the late Harry and Myrtle (Sherck) Oxender. He married Lorraine Berak on August 17, 1995 at Walt Disney World in Florida. Vern knew hard work from a young age. He had an amazing ability to stay positive – giving every endeavor his best, and inspiring others to do the same. Growing up, he and his brothers rose at dawn each day to milk cows and fed calves before school. He earned his BA degree in Math, Science and English at Manchester College, while delivering milk each day at 3:30 am, studying German and Calculus II, teaching math at an area high school, and maintaining a 4.0 GPA. His perfect score on his graduate admissions test preceded his Masters of Education at Ball State University and eventual Ed.D from Wayne State University. Vern eventually took on administrative positions as Principal of Bryant Junior High in Livonia, and continued as Deputy Superintendent of Birmingham Public Schools, and Superintendent of Haslett Schools. But the high point of his career was becoming Superintendent of Traverse City Area Public Schools. While in Traverse City he also served a valued professor at Central Michigan University, and Michigan State University. Vern was a devoted family man, traveling to 47 of the 50 states with his family camping and teaching his children the wonders and history of this great country, and eventually traveled all over the world with them. While working with his wife at CMU they took student teachers to Australia and England. Vern deliberately settled in Traverse City to enjoy the hunting and fishing opportunities that are abundant in the area. He and his son Dorin cherished their annual deer hunting trips, once resulting in a record-book buck for Vern. He shared his love of the seasonal salmon run with his son Daniel and the joys of lake living with wife Lorraine and daughters Dee and Kristy. Of course, no remembrance of Vern would be complete without mention of his garden and his love for the sweet-corn he raised that all his grandchildren enjoyed. Vern was a member of the First Presbyterian Church in Elk Rapids, and also the Rotary Club. He served many years on the Board of Child and Family Services and the IAA. He was also proud to train and educate many of the local area leaders through the Grand Traverse Chamber of Commerce Leadership Program. Surviving Vern is his wife, Dr. Lorraine Berak, son Daniel (Svetlana) Oxender, daughter Dr. Deanna (David) Burgess, son, Dorin (Shelia) Oxender, stepdaughter, Kristy (Stephen) McDonald, grandchildren, William and Elizabeth Oxender, Jordan and Nick Burgess, Shea Oxender, Harper Daigh, Sophia and Ian McDonald, siblings, Dr. Wayne Oxender, Joan (Jim) Lindsley, and Glen (Dianne) Oxender, sister-in-law Jean Oxender and many other loving family members, friends and devoted caregivers. Vern is preceded in death by his parents and brother Dr. Dale Oxender. Visitation for Vern will be held from 6:30 to 8:30pm at the Reynolds-Jonkhoff Funeral home on Friday, May 31, 2013. A funeral service will be held at the First Presbyterian Church in Elk Rapids on Saturday, June 1, 2013 at 11am. The Rev. Andrew Martinez will serve as officient. Memorial contributions may be directed to the Vernon L. Oxender Scholarship Fund at the Manchester College in Indiana or Central Michigan University Immokalee Student Teaching Fund. Please sign Vern’s online guestbook at www.reynolds-jonkhoff.com. The family is being served by the Reynolds-Jonkhoff Funeral Home.

Dr. Vernon “Vern” Lee Oxender, 78 of Williamsburg, died Tuesday, May 28 2013 at his home surrounded by his loving family. Vern was born on July 29, 1934 in Constantine, MI to the late Harry and Myrtle (Sherck) Oxender. He married Lorraine... View Obituary & Service Information

The family of Dr. Vernon "Vern" Lee Oxender created this Life Tributes page to make it easy to share your memories.