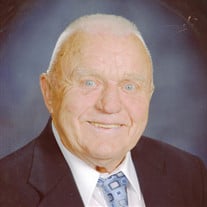 EMPIRE — Versel “Butts” Harriger, of Empire, passed away peacefully Thursday, April 9, 2015, at his home. He was born in Muskegon, on Dec. 24, 1926, to the late Austin and Mary Rose (Hoffman) Harriger. He was married to his wife, of 67 years, Charlotte D. (Mayme) Harriger. “Butts” as he was known to friends and family was an avid outdoorsman. He loved to hunt and fish at every opportunity. He always made a point of introducing young people to the outdoors, especially his family. Versel loved to shoot Skeet, trap and sporting clays. He was able to hunt in Alaska and throughout the western U.S., but his favorite place to hunt was right at home in Leelanau County. Versel was a gregarious man. He had a quick smile and had a sense of humor as bright as his blue eyes. His quick wit, caring heart and panache for life served him well with establishing friendships wherever he happened to be. He will be greatly missed by many. He served in the U.S. Army at the end of World War II. He was an armorer serving in an Armored division under General Patton. Versel worked as a Lather/Carpenter and was a member of the Wood Wire and Metal Lathing union for over 40 years. He was a member of the VFW. He was a lifetime member of the Benzie Sportsman’s Club and lifelong member of the NRA. Versel is survived by his wife, Charlotte D. Harriger; siblings, Donald (Joan) Harriger, Leah Ann (Bradley) Macarthur, Lorraine (Ed) Zientek, Barbara (Ernie) Zeigler, William (Linda) Olson, Gerald Olson, Carol Oosdyke (deceased); children; Danny Boon (Marion) Harriger, Diana Mayme Deegan, Kristen (Robert) Harriger-Shimek; grandchildren, Debra Catherine Deegan, Danny Skip (Gail) Harriger, Micah Deegan, John (Michelle Arnold) Harriger, Melissa (Brent) Lalomia; great-grandchildren, Alison Harriger, Ashley Harriger, Tyler Harriger, Beau Harriger, Carter Harriger, Anthony Lalomia and Zachary Lalomia. A visitation will be held on Thursday April 16, from 5 p.m.- 8 p.m., with the rosary prayed at 7 p.m., at St. Philips Neri Catholic Church in Empire. A funeral mass will be held at 10 a.m., on Friday April 17, at the church. In lieu of flowers, the family suggests a memorial donation be made to the Cedar Rod and Gun Club, Munson Hospice, or the Cancer Center of Traverse City. Please share your thoughts and memories with Versel’s family by way of his online guestbook at www.reynolds-jonkhoff.com. The family is being cared for by the Reynolds-Jonkhoff Funeral Home and Cremation Services.

The family of Versel "Butts" Leroy Harriger created this Life Tributes page to make it easy to share your memories.