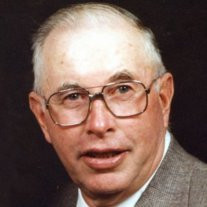 Versil "Huck" M. White, 89 of Williamsburg passed away March 22, 2013 at Munson Medical Center. Versil was born on August 10, 1923 in Elk Rapids to the late Vernon P. and Edna (Murray) White. He lived his entire life in Elk Rapids Township on US 31 South of Elk Rapids. Versil served with the United States Navy in World War II and was very proud of his service to his country - knowing it would help future generations to enjoy a better way of living and freedom. He worked many years on the family farm and upon his return from service married his longtime sweetheart, Jane A. Conant on June 15, 1946 in Yuba, MI. In 1959, he and Jane purchased a farm just a half mile from his family farm. There Versil and Jane raised their family and enjoyed the rest of his life. He was also a member of the Landing Craft Infantry Association, AMVETS, V.F.W., and a member and supervisor of the Elk Rapids Township Board for 20 years. He was a devoted 4-H Leader and he and his wife, Jane, were the owners of Farmer White's Orchard and Farm Market. Versil is survived by his wife Jane, daughters Janet (Gary) Flaska of Cedar and Mary (James) Cooper of Williamsburg, six grandchildren; Matthew (Meghan) Flaska, Christopher (Sarina) White, Vincent Cooper, Amy White, Nicholas Cooper, Timothy Cooper and honorary granddaughter, Aubyn Amos; three great-grandchildren; Audrey Flaska, Caitlin and Jaxon White, daughter-in-law Judy Husby, sister Betty VanGorden, brothers George "Dick" R. (Nancy) White, and Jack (Barbara) White. Versil was preceded in death by his parents, son Vernon C. White, grandson Nathan Flaska, brothers Vernon, Robert, and William, and sister Josephine Bargy. A Memorial Service honoring Versil will be held at 11:00 a.m. on Wednesday, March 27, 2013 at the First Presbyterian Church of Elk Rapids, 404 Spruce Street, Elk Rapids, MI 49629. Rev. Dr. Andrew Martinez will officiate. Military Honors will be conducted under the auspices of AMVETS Post 114. Friends are welcome to visit with Versil's family at the church on Wednesday from 10:00 a.m. until the time of the service. In accordance with his wishes cremation has taken place; Versil will be laid to rest at the Yuba Cemetery this spring. In lieu of flowers memorial contributions may be directed to the Yuba Historical Society - School Renovation Fund, 8265 Sayler Rd., Williamsburg, MI 49690, AMVETS Post 114 or the American Cancer Society.

The family of Versil "Huck" White created this Life Tributes page to make it easy to share your memories.