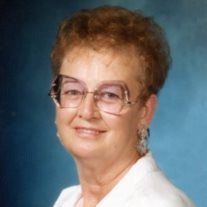 Virginia J. Brien, 80, of Traverse City, formerly of Mount Pleasant passed away peacefully on Sunday, March 9, 2014 at Grand Traverse Pavilions. Virginia was born on September 7, 1933 in Mount Pleasant, Michigan to the late Joseph and Fern (Jones) Fitzpatrick. She was married to William R. Brien on November 13, 1965 in Shepherd, MI. She graduated from Alma High School. Virginia had been employed as a secretary with Northwestern Michigan College until her retirement. Virginia was a wonderful homemaker and an incredible cook. She also enjoyed camping and traveling. Virginia loved her toy poodles, especially Corey, her pet of 17 years. Virginia is survived by her husband, Bill, a son Timothy (Tara) Brien, four grandchildren; Mitchel Brien, Griffin Brien, Alyssa Brien and Kashton Brien; a brother, Jim Fitzpatrick, a sister, Rose Marie Litwiller. Also surviving are many niece and nephews including a special niece, Faye Fitzpatrick. She was preceded in death by a brother, Donald Fitzpatrick. Friends are welcome to visit with the family at the Reynolds-Jonkhoff Funeral Home, 305 Sixth Street, Traverse City, MI 49684, on Thursday, March 13, 2014 from 2 to 4 p.m. and 6 to 8 p.m. and on Friday one hour prior to the service. A funeral service honoring Virginia will be held at 1:00 p.m. on Friday, March 14, 2014 at Reynolds-Jonkhoff Funeral Home. Pastor Chris Lane will officiate. Burial will take place in the Riverside Cemetery of Mount Pleasant at a later date. Those planning an expression of sympathy may wish to consider a memorial donation to Hospice of Michigan, Grand Traverse Pavilions or Alzheimer’s Association. Please feel free to share your thoughts and memories with Virginia’s family at www.reynolds-jonkhoff.com. The family is being served by the Reynolds-Jonkhoff Funeral Home.

The family of Virginia J. Brien created this Life Tributes page to make it easy to share your memories.