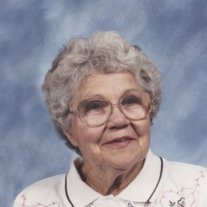 Virginia Irene (Camfield) Hemming July 5, 1920 – August 12, 2013 TRAVERSE CITY -As we travel the road of life, we sometimes meet that incredible individual who positively influences the lives of everyone met. Virginia Irene (Camfield) Hemming was such a person. Virginia graduated Traverse City State Hospital's Nurses Program in 1941, becoming the head of Maternity at Munson Hospital and later worked at Thirlby Clinic. Virginia married John "Jack" Hemming in 1952 and in 1955 the couple purchased a farm and moved to the Old Mission Peninsula. Virginia worked tirelessly maintaining the family farm, where they also bred and trained race horses and basset hounds. Virginia and Jack spent winters in Hawkinsville, Georgia, where Virginia was embraced by many close friends and loved ones. It can be said that the best days of Virginia's life may have been spent at their little southern getaway. Virginia was preceded in death by her husband John (Jack) Hemming, her parents; three of her brothers; her daughter, Eunice (Haas); and her beloved granddaughter, Lauren Hemming. She is survived by her remaining three children and their families, Jed (Dawn) Hemming and their daughter, Lisa of Traverse City; John (Elizabeth)Hemming and their daughter, Sophia of Boyne City; Sara and Bryant Bachelor and their son, Spencer of Canton,Michigan. Virginia’s daughter, Eunice Brown Haas, is survived by four children, Stephan, Katherine, Cammy and James and many great grandchildren. A memorial service is being held at Reynolds-Jonkhoff Funeral Home on Friday, August 23, at 10:30 a.m., with Pastor Daniel LeCouteur officiating. with visitation to start at 9AM. Cremation has taken place, and a marker will be placed at the Bohemian Cemetery on the Old Mission Peninsula. In lieu of flowers, the family requests memorials be directed to the Hospice House or Family of Faith Lutheran Church.

The family of Virginia Hemming created this Life Tributes page to make it easy to share your memories.