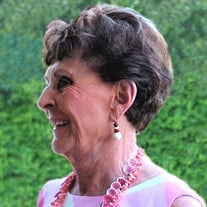 Virginia “Ginny” Dunne Stark, age 94, passed away Friday May 8th in Traverse City, Michigan. She was the first born of ten siblings in Detroit on September 19, 1925 to the late Walter J. and Nola M. (Walsh) Dunne. She was married to William J. Edwards for 22 years of which that marriage produced eight children. She was later married to Harry S. Stark for 30 years. Ginny and Harry moved from Birmingham to Traverse City in 1989 to enjoy their ‘working’ retirement, following their close friends, the late Ted and Ellen Monahan. Ginny embraced life and had many interests. She enjoyed teaching and racing sailboats at the Detroit Yacht Club, oil painting, tennis, swimming, traveling the world, cross word puzzles, and as a woodcarver, she created beautiful artistic life-like waterfowl representing the varied birds of Northern Michigan. Ginny and her lady friends were mainstays on weekly ‘Tuesdays at Firefly’. Her positive spirit, quick smile, easy laugh, and dry Irish wit will be greatly missed. Ginny embraced her Irish heritage and was known to dance the Jig every year on St. Patrick’s Day. She was also an avid bird watcher and loved to have all the feeders full, and could name every species. She was on the Committee to save the loons back in the 80s and was an eager participant to protect the species. Ginny had a keen interest in Oriental art, and collected an array of items to represent the beautiful artistry of the Orient. Ginny appreciated all things art related; she would bring her children into the Detroit Institute of Art at young ages to introduce them to the masters. She kept large color glossy coffee-table books of the masters: Renoir, Monet and Van Gogh to share her appreciation of the arts to her children and grandchildren. She managed to paint several exquisite oil paintings even while raising eight children. Ginny and Harry enjoyed several loving years together in their home on Long Lake where they hosted many barbecue’s for family and friends. Ginny was a wonderful matriarch to her many children and grandchildren, guiding her family in a calm, wise, kind, positive, loving manner. Ginny is survived by her eight children, Thomas (Audrey) Edwards of Ft. Lauderdale, FL, Kathryn Edwards of Strasburg, CO, Barbara Edwards of Cayucos, CA, Charles Edwards of Ft. Lauderdale FL, Monica (Larry) Hatfield of White Lake MI, William Edwards of Rochester Hills MI, Patricia Edwards of Traverse City MI, and Eileen (Gerd) Welke of Clairmont, CA; fifteen grandchildren; sixteen great-grandchildren; siblings Marion Nagle of Bloomfield MI, Walter Dunne of Canton MI, Tad (Dorothy) Dunne of Royal Oak MI, Michael (Gerri) Dunne of Johns Creek, GA, and Marguerite (Robert) Jassoy of La Jolla, CA. Ginny is also survived by many dear friends, including Eileen Milner, Carol Hoffman, Liz Saylor, Norb & Ginny Bergmann, to name a special few. Ginny is preceded in death by her first husband, William J. Edwards; her brothers Robert Dunne, and Paul Dunne; her sisters, Eleanor Carver and Kathleen Ponziani, and her late husband, Harry S. Stark. Contributions may be directed to The Father Fred Foundation, 826 Hastings St, Traverse City, MI 49686. A service will be held at a date to be determined. Notice to follow.

Virginia &#8220;Ginny&#8221; Dunne Stark, age 94, passed away Friday May 8th in Traverse City, Michigan. She was the first born of ten siblings in Detroit on September 19, 1925 to the late Walter J. and Nola M. (Walsh) Dunne. She was married... View Obituary & Service Information

The family of Virginia "Ginny" Stark created this Life Tributes page to make it easy to share your memories.