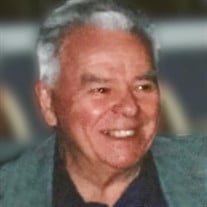 Vojin Baic, 89, of Traverse City passed away Monday, December 10, 2018 in Traverse City with his loving family by his side following a brief illness. Vojin was born on February 19, 1929 in Belgrade, Yugoslavia to the late Milan and Sofija(Buljugic) Baic. He met the love of his life Mary “Pat” Patricia O’Brien at the Milwaukee Light Opera Company. The couple were married on November 24, 1956 in Milwaukee and together they raised five wonderful children. Early in his childhood and adolescence, Vojin, often with his brothers, Nikola and Proka, spent much of his time participating and excelling at many activities and sports, including running, soccer, swimming, cycling, and especially skiing and rowing. Ultimately it was thru his travels with Yugoslavia’s national rowing team at the young age of 20, that Vojin made the difficult decision to leave his family to escape the oppression of communist Yugoslavia in 1949. He eventually emigrated to the US by way of Belgium and Germany and passed through New York’s Ellis Island in September 1950. In the following 20 years, he worked to eventually bring all of his siblings and mother to the United States with invaluable assistance from then US Senator, Robert Griffin, who was coincidentally from Traverse City. Vojin proudly served his new country with honor in the United States Army during the Korean War. Spending most of that time in Japan, he felt very fortunate and was even able to strap on skis and a few race bibs, winning the Asian Military Games for the US Army. Upon returning from his military service, and eventually settling in Milwaukee. Vojin resumed many of his competitive sports, but actively began to seek, develop, and hone his teaching and coaching skills. He became very active with the United States Ski Association (USSA) on a regional and eventually national level working with National and Olympic Team coaches and athletes traveling both domestically and abroad. He also briefly studied political Science at Marquette University before marrying and starting a family. Through many associations with a number of wonderful and influential people, Vojin and his growing family made their way to Grand Rapids for a brief 2 years. Vojin fell in love with the Grand Traverse area during several trips up north and in 1966 moved from Grand Rapids to their 6th street home in Traverse City for 42 years . He had accepted a full time job with the USSA‘s Central Division headquarters in town. The USSA moved its HQ to Chicago 2 years later and Vojin had no desire to move his family from paradise. It is here that he approached the City of Traverse City, and again with fortuitous support from many people, quickly worked his way from a non-position with the Parks and Recreation Dept. to becoming the Director of Recreation for 22 plus years. It is in this position that Vojin was finally able to fully realize his gift to teach, coach, and introduce people of all ages, abilities, and backgrounds the benefits of sports, recreation, and an active lifestyle. He worked with many other like-minded people to start numerous programs, events, and clubs, including bicycling, cross-country skiing, swimming, triathlons, tennis, and many others. A Hickory Hills based summer day camp for kids, safety on the local beaches, and Senior Center activities were just as important to him as training national level athletes on cycling roads and ski trails. In 1973, at the age of 43, Vojin was honored with the Traverse City Chamber of Commerce Distinguished Citizen Award in large part due to his vision and influence on the area’s youth. After retiring in 1986, he continued to stay involved in his vision for the remainder of his life, often shouting words of encouragement at events everywhere. He found a great outlet to extend his community service thru his involvement in the Biederman Foundation as well as many other organizations. Vojin enjoyed meeting many new friends and staff in the last 10 years at the Woodwinds Condos near the Leelanau trail and most recently at the senior apartments at Samaritas in Acme. Vojin attended Immaculate Conception Church when possible. More than anything, Vojin loved his Family and the friends he met throughout his life. A hardcore fan of people(and the Green Bay Packers). Vojin laughed and joked endlessly with all, but maybe just a bit more with his grandchildren and great-grandsons and enjoyed following their activities. A devoted husband, father, grandfather, great-grandfather, and brother, Vojin was a beacon of light to many. He was a wonderful man and will be deeply missed. Surviving Vojin are his loving children, Ivanka (Steve) Berkshire of Traverse City, Milan (Carrie) Baic of Williamsburg, Nickola (Anne) Baic of Boyne City, Maria Baic Weist of York Haven, PA, Annie (Darrell) Pifer of Portage, MI; grandchildren, Erica (John) O’Hearn, Lindsay (Taylor) Ball, Brendan (Hannah) Baic, Nickolas and Ben Weist, Jennifer Pifer, Katie (Joey) Lioy: great-grandchildren, Traverse and Finnley O’Hearn, brother: Proka (Gordana) Baic; sister Maria Baic, and many other loving family members and friends. Vojin is preceded in death by his wife of 60 years; Mary “Pat” Baic, his parents; father and mother in-law Chester and Viola O’Brien; siblings Nikola Baic and Olga Champt, grandson Christopher Paul Baic, and great-grandson Christopher Milan O’Hearn. Visitation will be held from 4-8pm at the Reynolds-Jonkhoff Funeral Home on Sunday, December 16, 2018. Mass will be held at Immaculate Conception Church on Monday, December 17, 2018 at 11am. Fr. James Hayden will serve as celebrant. In lieu of flowers, Vojin would encourage you to pay it forward and give some time to your favorite youth organization or memorial contributions may be directed to The Traverse Area District Library or Traverse Area Recreational Trails (TART). Kindly share thoughts and memories with Vojin’s family at www.reynolds-jonkhoff.com . The family is being cared for by the Reynolds-Jonkhoff Funeral Home.

Vojin Baic, 89, of Traverse City passed away Monday, December 10, 2018 in Traverse City with his loving family by his side following a brief illness. Vojin was born on February 19, 1929 in Belgrade, Yugoslavia to the late Milan and Sofija(Buljugic)... View Obituary & Service Information

The family of Vojin Baic created this Life Tributes page to make it easy to share your memories.